(Or: Ricky Is Dicky)

We open this week on applause for the first time! Finally, the American public has figured it out: this show is fucking amazing and it’s going to change the world.

Lucy is totally OCD, straightening the already straight papers and cleaning an already clean house. Please, someone, give her something to do. THIS IS NOT AN APPROPRIATE USE OF ANYONE’S TIME.

Ah, she’s finished. What a lovely living room. Totally worth the sacrifice of your dreams. Well played.

Then Ricky comes in and poops all over everything like a spoiled brat kid who refuses to potty train and needs a damn toy trunk. He leaves trash everywhere, throws his clothes around like a clumsy stripper, and drops food scraps for the dog they don’t have.

He even cracks nuts on the floor. It doesn’t occur to him he can only do that because of how fucking clean the floor already is. Want your nuts cracked, Ricky? I’ll crack your nuts.

Ricky doesn’t want to put his stuff in the closet because he’s already closeted enough as it is.

Lucy gets on her high horse about how she likes everything to be clean, which we all know is a gigantic lie because of this and this. Face it, Lucy likes it dirty and Ricky knows it.

But in the house, things are different. The house is all Lucy has. This room and its cleanliness are quite literally her only purpose for living until she gets knocked up.

And Ricky’s like I’m gonna cover your purpose for living in my own garbage.

Ricky: Honey just drop the subject, will you? A man’s home is his castle, and this is my castle.
Lucy: I bow to Ricardo the First, King of the Slobs.
Ricky: Thank you, my faithful subject.

Ricky’s been waiting his whole life for a woman to bow to him like royalty. His scepter just rose 6 inches.

Lucy decides to divide the room in two: dirty side for him, clean side for her. She even cuts their cigarettes in half as a super gross product placement for Philip Morris and divides up a phone call between the two of them.

At this point company comes over and company says “OMG you guys need counseling.” If Fred and Ethel think you’ve got problems, you should seriously consider a weekend away. It’s like they’ve both got a conga drum stuck up their butts. Maybe Burning Man would help? Guys, just go out to the desert and be for a little while.

My husband sees Fred and he’s like “That is a sweet suit. I love his tie and how it’s tucked into his pants.” Someone buy my husband a gift card to Lord and Taylor or Old Navy or something. I think he just needs to see what else is out there.

It’s a sweet suit… in that it looks like the screen of Candy Crush.

Fred continues to show his great taste by complimenting the pile of gross that is Ricky’s side of the room. He joins Ricky.

You know I had a roommate who slept in her own garbage, buried underneath the covers about two inches deep in wrappers and melted candy pieces. Sweet girl but one time I saw an apple core moving on her bed and it took me 20 minutes to figure out she had someone over for the night. That’s a true story.

Ricky insults Lucy’s side of the room:

Ricky: Everything over there’s… sterilized.

Ricky and Fred are like, “We’re just two men, sitting here, slowly peeling bananas while looking longingly at each other.” And the ladies decide to drink some beer and binge on some cold chicken. I swear, as though these bitches couldn’t be more awesome.

This is all gonna work out fine: Ricky’s side doesn’t have a kitchen, so he’ll starve or only eat what Lucy feeds him like an animal, and Lucy loses the bathroom so she’ll have to do her business in the sink.

Ricky goes to rehearsal and again we see my favorite character in the series: the lady harpist. I want to know her name. I think they might say it in a later episode, but my husband says “I doubt it” and names her Suzie. We’ll all have to wait and see. The anticipation! 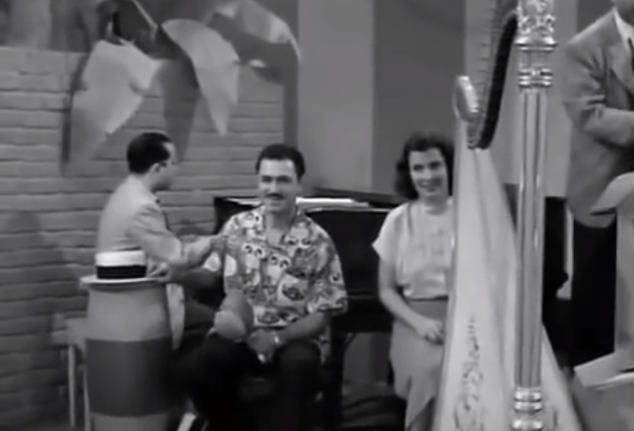 She just looks like such a nice person. How’d she get stuck with these assclowns?

Ricky is singing and the cleaning lady stops mopping to watch. This is what we call SYMBOLISM, kids. He dances for her and with her and she’s about ready to jump his bones, all while his actual cleaning lady aka his wife is back home picking up his banana peels and cleaning up his nut shells.

He sings an adorable number about ignoring reality by covering your face with a hat, which sounds about right since he is obviously ignoring the reality of how badly things are about to go for him.

Ricky’s press agent introduces him to Jim, a magazine photographer who’s doing a feature. He wants to get photos of Ricky at home. No problem! Ricky says, lemme just call my faithful subject.

Ricky: She’s the best little housekeeper you ever saw.

Ricky calls in and orders Lucy to clean up the house again. She assumes it’s for a small magazine no one reads. She is wrong.

Lucy decides to prank Ricky. And she says:

Lucy: As long as it’s a gag I might as well go whole hog.

That usually means Lucy is going to buy a whole hog. So yeah. Shit’s about to get real.

When Ricky gets home with the photographer, Lucy has done a little decorating.

There’s underwear hanging across the door, with garbage littering the whole place. It’s an actual dump. Lucy’s dressed in a swamp outfit, scratching herself like she has fleas. She’s rocking a flannel shirt. She’s basically a barista.

Lucy keeps forgetting she’ll have to clean this all up later.

Ricky has this weird mumbling moment where he says, “Lucy I swear I’m gonna pu-“

And he’s interrupted. I’m going to assume he was about to say “put a ring on it” and not “punch you in the face.” I have to assume that, or I’ll never finish this damn project.

Ricky’s surprised to find Lucy has chickens in the living room. Of course she has chickens – she bought them in Ep 2 and honestly it’s Ricky’s fault for forgetting that. Who forgets their wife bought chickens? In Manhattan? Maybe he thought she binge ate them all last night.

So now the photographer has a pretty good scoop. “Band leader clings to music to avoid his lunatic wife, Jane Eyre-style.” He’s like, yeah. This will do. I can probably sell 20, 30 million copies of this.

Lucy gets Ethel and they go “hunting” in the bedroom. There’s a gunshot. No one seems traumatized by this.

And she comes out dragging a dead bear. OMG I’m in love with this woman. She drops the bear, does a Tarzan call, cements herself as the butchiest broad in town, and the photographer shits his pants. This is his big break.

She’s either posing for a photo or singing “The Dog Days Are Over.”

Scene change. Time has passed, and Lucy is now sitting on the couch crying. While she thought it was a throwaway magazine, she actually made the front cover of LOOK.

She’s lucky it’s 1951. Imagine her kind of crazy on the front page of Reddit. This would be the defining moment in her life. She’d forever be remembered as the fucked up bear lady meme and the Twitter headlines would read “Koala-ty Photos!” and “Ricardo Bears All!” #bearlady

Ricky’s happy, though. The photographer didn’t use any pictures of the apartment, so his reputation remains as squeaky clean as the living room was in scene one.

If there’s anything we’ve learned from this, Ballers, it’s not that all men are messy.

It’s that one specific man is a bonafide, unapologetic dick.

–
Like the review? Join me next week for S01 E09: The Fur Coat. New posts every Friday! 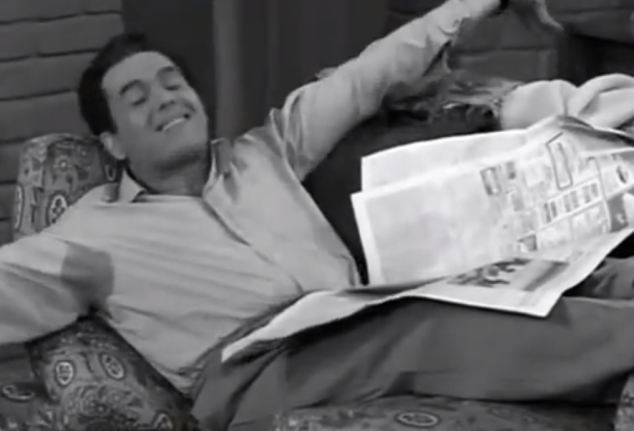 You’d think with all those long johns Ricky could also afford an undershirt.