(Or: Lucy and Ricky do something together for once)

Welcome back, my dear Ballers. I’ve missed you like Ethel misses singlehood. Let’s dive in.

We open on our typical Ricardo-Mertz double date. Everyone’s standing around the piano singing “I want a girl just like the girl that married dear old Dad.” Freud’s like, “Yeah, I know! I’ve been saying this for decades!”

Those lyrics are creepy as hell. Here’s the first verse of that song (emphasis mine):

I have looked all over, but no girlie can I find,
Who seems to be just like the little girl I have in mind,
I will have to look around until the right one I have found.
I want a girl, just like the girl that married dear old Dad.

I’m so confused. Does he want his mother or a child? Either way, you should probably go ahead and arrest him.

Ricky’s dressed like a country club member who doesn’t play golf but wants to look like he does. Fred looks like he’s wearing a onesie. And Lucy is singing on key. It’s like up is down.

Fred is that guy on Dancing with the Stars who makes it to 3rd place on pity votes.

Eventually Lucy wants to stop singing, because it’s 2am and there are other tenants in the building. She’s outvoted by the insensitive pricks who think their other tenants can eat poop.

Ethel and Fred leave, and Ricky and Lucy decide to sing a little more. But out of no where Ethel calls up and complains. She’s obviously on the rag, because her mood changes faster and more drastically this week than Mississippi’s gay marriage laws.

Proof that men ran advertising: “Dull” is not what it feels like, bro.

A few minutes later, Lucy is getting ready for bed by brushing her hair 100 times. Funny, that’s also the percentage of men in the United States Senate that year. Put your brush away and read a book.

She and Ricky are wearing matching pjs, which makes sense: This is the first episode ever where they’re on the same side of an argument. It’s a beautiful thing. Unlike their bodies in those pjs.

They fight over opening and closing the window, and I side completely with Lucy on this. You can always add blankets if you’re cold. There’s nothing you can do if you’re hot. This is just basic human decency, Ricky. Grab an extra quilt and go to bed like a grown ass man.

Opening and shutting the window prompts Fred to call, dressed like Wee Willie Winkie and yelling for them to shut up. 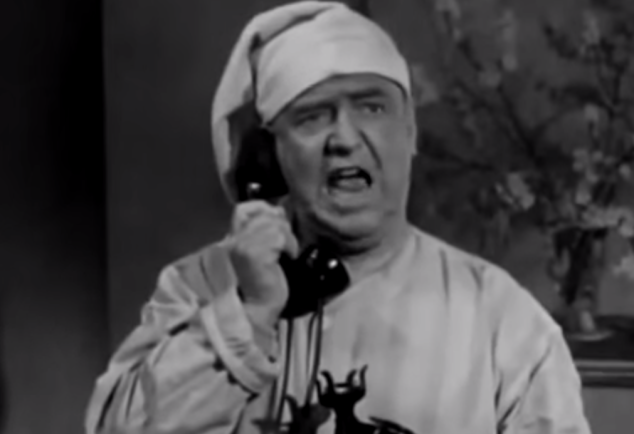 3 guesses where Fred shoved the broom after he banged on the ceiling with it to shut up the Ricardos.

At this point my patience with the Mertzes is getting thinner than Fred’s hairline.

Lucy and Ricky kiss… then pause… then kiss, kiss, kiss. Fred and Ethel are lucky things didn’t get even louder up there.

And finally the shower starts dripping and the scene becomes a Hitchcock film.

The name Hitchcock is funny. Or the adjective: Hitchcockian. Funny!

Ricky yells, runs into the bathroom, breaks the pipe, floods the apartment, screams at the Mertzes, and decides they’re moving out. 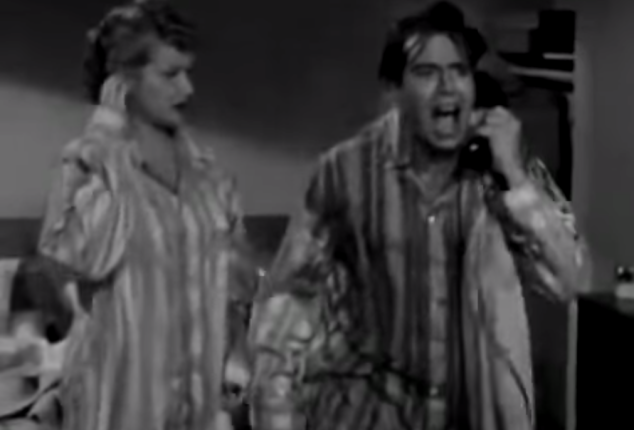 The next day Ethel comes by to get her rings, which she took off to play the piano because apparently that’s something people do. Oh yeah and she says they’ll hold them to the lease and charge them 5 months rent.

Ethel: It’ll TAKE the next 5 months’ rent to redecorate!
Lucy: REDECORATE!?
Ethel: Yes. After we fumigate.

Then she takes her pom poms and exits like the bitchy high schooler she is.

Lucy is furious, so she and Ricky decide to get the Mertzes to break the lease. They stomp everywhere, throw books, and drop furniture. They make a prank call.

It’s WONDERFUL! There’s something super special about watching these two be evil together. Probably because they’ve both always been so damn good at it.

Let he who hasn’t used a riveting hammer on a trash can lid to burst the eardrums of his best friend cast the first stone.

That night, Ricky’s band holds rehearsal at the apartment and guys, it’s SO MUCH FUN. Seriously I beam every time I watch this episode. I would give a kidney to be at this party. Hell, I’d give two kidneys if I could go to the party before the surgery/funeral.

Problem is, they mean to exact revenge on Fred and Ethel, but those crafty dicks were downstairs all night selling tickets to the rehearsal.

Now they’re back in their apartment. So Lucy recommends annoying them with a classic Cuban folk song. Turns out she means the “Mexican Hat Dance.” Hey, Lucy, one sign it isn’t Cuban is when the actual title says it’s Mexican.

So apparently they cause part of the ceiling to fall in and that does it. Fred and Ethel let them out of the lease. 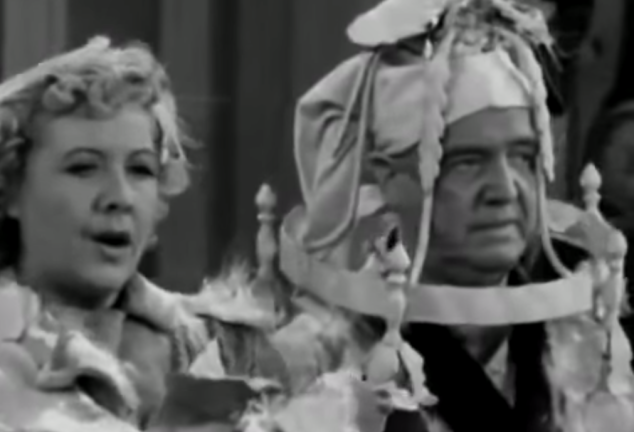 Good thing Fred had that stupid cap to protect him.

The next day, Lucy’s packing up everything. They’ve pulled an all-nighter partying with the band, and didn’t even change clothes afterward. The first time I did that was at NYU, and I wound up falling asleep in Washington Square Park between a drug dealer and a Hare Krishna meeting.

At this point, Ricky and Lucy both feel a little weird about moving out. They did make the decision in the middle of the night over the course of about 5 minutes. So yeah. It’s a terrible idea.

And where are they even moving? I mean, considering their address is in the middle of the East River, maybe the whole building should consider relocation.

Ethel and Fred come in and they all cry and change their minds.

Fred has written up a new lease and they agree to sign it sight unseen, so only the devil knows what’s in there. Don’t be surprised if next episode Lucy and Ricky discover there’s a wife swapping clause on page 2.

If I could make a wax museum of this scene in my living room, I would. I’d lose all my friends, but I’d have my wax friends.