(Or Lucy Becomes a Barista)

**More WTFacts are at this week’s Episode Watch Party.**

We open on Lucy doing the dishes and singing. Life is great! After all, Lucy and Ethel may have a chance to join the Society Matron’s League!

This is a “cream of society” group that gets together to discuss, I presume, how the younger generation makes their tea sandwiches incorrectly and how “urban” the Upper West Side has been getting lately.

Lucy’s concerned about shaking their hands, not because these women sound like constipated troll-beasts, but because of all the dishwashing Lucy’s endured over the years. She does the math:

How is it even possible to use 20 dishes every single morning for breakfast? Is she scrambling and plating every egg separately? And does Ricky really come home every day for lunch? And isn’t he at the club around dinner time? And don’t they ever go out to eat? Have these people really never enjoyed a pot of ramen?

Lucy’s math is so bad, Ricky tried to hang her pad and paper out of reach.

They walk in to the living room to make some demands:

At first you think Lucy might really revolt. Like ask for equal pay, or maybe demand she only have to use FIFTEEN dishes every single morning. Or maybe ask if she can make cold cut sandwiches 1 day/week like the freaking normals. But no, she just asks for a dishwasher.

So naturally Ricky complains about how spoiled modern women are, with all their electric appliances and modern conveniences.

If he said that to me after I washed 219,000 dishes, he’d get to enjoy the modern conveniences of a hospital room.

“I’m spoiled? You’re the one in a cigar jacket playing cards, and I’m the one in the motherfucking apron.”

The women bet the men they can go the longest without such luxuries. They dare each other to go back to 1900. (You know, when things were old-fashioned. Like sleeping in two twin beds and not being allowed to say “pregnant.”)

This bet all starts out quaint and pleasant. An oil lamp here, a freestanding bath there. But then Ricky cuts himself shaving and suddenly looks like he owes money to Tony Soprano. It’s gonna go downhill fast.

To start, all four have lost the bet already:

Thomas Crapper patented the modern toilet in 1891, but elevated water tanks didn’t appear until 1910. So while they’re crapping using Crapper’s technology, the modern crapper keeps pre-crap water closer to the crapper itself. That means they’ve been crapping in the wrong crapper all day, and that makes this whole bet a load of crap.

Even making coffee is an ordeal. Lucy uses well water, hand grinds the beans, and adds extra ingredients like egg. The whole thing takes 50 seconds, and the audience laughs.

But that doesn’t really translate to 2015, does it? Nowadays tattooed dudes with handlebar mustaches brew it that way every fucking morning next door to the make-your-own tintype pop-up downtown. And it costs you $6.00. And it takes ten fucking minutes because the “energy has to be ready for the perfect brew.” Joke’s on us.

He enjoys taking a bath in the kitchen because, unlike some people, he doesn’t spend 8 hours a day in there.

The men point out Lucy and Ethel have to churn their own butter and bake their own bread. The women fail to point out that Ricky has to build his own non-electric sound system at the club, and Fred should have to remove the electric doorbells from the building he owns. There are more holes in this plot than there are at the kinky sex club Fred keeps trying to get into.

Both of the women now make crucial mistakes: Ethel churns milk instead of cream, which gets her nowhere fast. It’s like trying to explain to a man what mansplaining is. Give up now or you’ve lost your afternoon.

Lucy, on the other hand, puts in 5x the yeast she needs for her bread. Did I mention she’s not good at math?

Over the next few minutes, the bread grows big and takes over everything. It won’t do what she wants and it’s hard to control. And it’s white and crusty. OMG it’s Donald Trump.

Eventually it flies at her from the oven and they have to saw it in half before it kills her. Not sure my metaphor fits the whole situation, but I wanted to toss in a Trump joke. 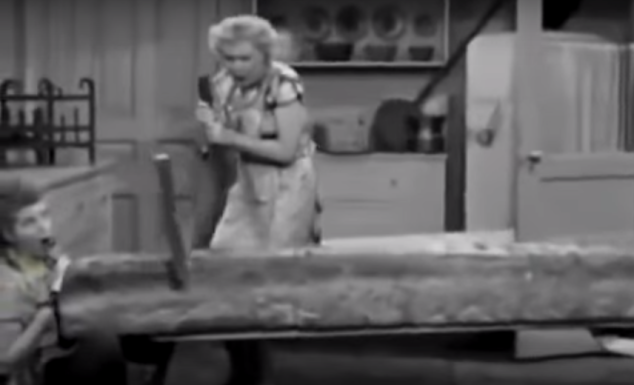 “Don’t just loaf around, Ethel, I rye-ly need you to challah for help!”

In the meantime the ladies get a telegram from the Society Matron’s League, because why call? Phones are for middle-class filth.

The telegram says, “You’re invited to a tea to be scrutinized.” Also known as every. baby shower. ever.

So now things are serious. Lucy and Ethel need the men to give up on the bet, so they can go to the salon. They decide to make the men wear old-fashioned clothes, which just makes the whole gang look more like hipster Brooklyn.

Williamsburg, 2015: “Want to catch a silent film after brunch?” “K cool, I’ll meet you at the dog park latte bar.”

Ricky and Fred are all in. They love wearing their new clothes. To be fair, Fred looks the exact same. He just says razzmatazz now and is generally nicer to Ethel.

Fred (to Ethel): What are you wearing that bustle for, honey? You don’t need it.
Lucy: Pay no attention to him. You leave it on.
Ethel: I’m not wearing a bustle.

You go, Ethel. You be all about that bass. We can tell you ain’t missing no meals. My anaconda don’t want none unless you got Ethel.

Then, while they’re all in costume, the Society Matron’s League shows up for a surprise visit! I’m so glad clubs don’t do this today. They’d find me knee-deep in unswept dog hair, eating the last of the linguine with my hands, looking up Bachelor in Paradise on one screen with “pinkie toe itches do i have cancer” in the search box on the other screen. 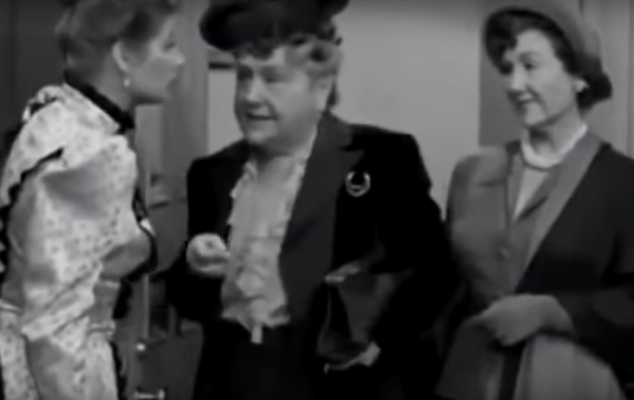 The Society Matrons League has two prerequisites for its president: a big head figuratively and a big head literally

No, before your surprise visit, we took off all the shits we give.

Ricky tells them it’s just rehearsal for the club, and they look at him like they found a fingernail in their salmon.

They’re not into “show people,” they explain, but they might make allowances. Lucy’s like “I cordially invite you to consume defecation and expire.”

In the end, Lucy is the hero, Ricky gives her $50, and they have 400 pounds of bread and butter in the kitchen.

Fame, money, and carbs. That is literally paradise.

–
Join me next week for S01 E26: The Marriage License. New posts every Friday!