(Or: Lucy Runs Out of Money and Dignity)

Get all the WTFacts at this week’s Episode watch party!

We open on a very busy Lucy, frantically preparing her accounts to show Ricky. She’s terrified.

Of course she is.

Ballers, I’ve been hinting at this for weeks. Our girl’s a train wreck, and someone needs to give this shopaholic an intervention or Episode 6 will be “Lucy Goes to Bankruptcy Court.”

Ricky comes in and Ethel’s so scared of him, she flees. This is the second week in a row Ethel hightails it outta there because of what Ricky might do to Lucy. Class, listen up: this is what we call enabling.

But give the girl some credit! That covered rent in Manhattan! Plus a fancy “Household Accounts” book, a donkey, a human pressure cooker, a Chiquita Banana Lady costume, an oyster feast, three steak dinners, and 2 hillbilly outfits.

She’s still paying off bills from Christmas. This aired on November 12, so yeah. They’re fucked.

Ricky’s confused – if she hasn’t paid for water, phone, or electric, why haven’t the companies turned everything off?

Lucy says they threatened to, but she “jollied them out of it.”

So then Lucy jumps up on the couch like a 2-year-old, and Ricky talks to her like that’s exactly what she is, and tells her she’s used up her allowance till February. He’ll handle all the money and pay all the bills.

My husband chimes in: “Ricky’s kind of the Angela Merkel of the EU right now.” And I say, “Go and nerd somewhere else, nerd face.” And then he’s all like, “That’s not very nice. I’m just offering a geopolitical perspective. It’s an austerity measure.” And I pour myself another drink.

Now comes my least favorite moment of all of I Love Lucy: Before Ricky leaves, he force-kisses a crying Lucy, looks up, and says,

AND NO ONE LAUGHS. 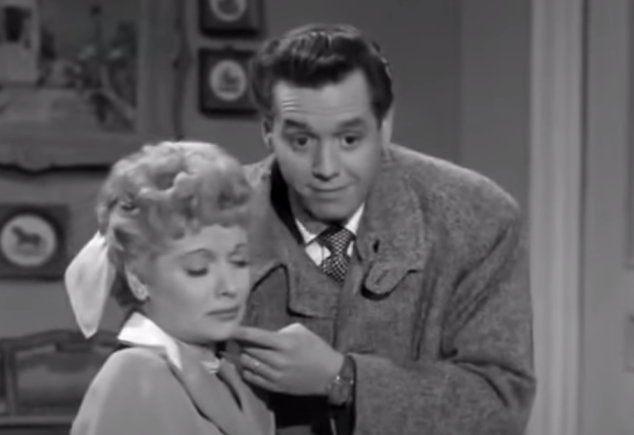 Unlike other vampires, Ricky has evolved to thrive on a diet of women’s tears.

Lucy is penniless and distraught. So Ethel convinces her to go on the radio show “Females Are Fabulous.” First prize is $1000.

Contrary to what you might think, “Females Are Fabulous” is not a gender-neutral game show about alliteration. It’s…

“Based on the theory that any woman is willing to make an idiot out of herself in order to win a prize.”

You might be tempted to judge this misogyny. But our generation has Bachelor in Paradise, and I don’t think that show even has a prize, so really we’ve all collectively gotten worse, male and female.

The host is a sleaze bag from Sleazeburg who talks like an auctioneer selling a half-eaten hot dog to a first grader.

You might wonder, “Why doesn’t Fred just play this part?” Well, yes, Fred does have the body for radio and relishes mistreating women for laughs, but he’s so busy landlording and kicking Ethel while she’s down, I don’t really see how he’d have time. Instead, he’s not in this episode at all. See you soon, Fred. We miss you.

To win the $1000, Lucy sings “My Bonnie Lies Over the Ocean” while the host waterboards her whenever she references water. Technically it’s less demeaning than a wet T-shirt contest because she’s wearing a waterproof frock and there are puns:

But that’s not all. Now she has to win Round 2. And to make any woman poop her pants at this prospect, they bring out the previous winner Mrs. Peterson, who is now in a near full body cast.

Lucy tries to leave because holy shit this is getting scary but they push her back and explain the rest of the game. 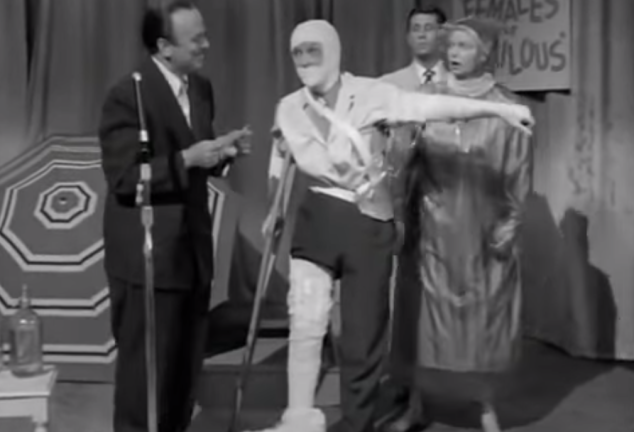 “Females Are Fabulous” abuse victim. The funny part is, it’s radio and her jaw is broken, so no one will ever know!

To win the $1000, she has to introduce Ricky to a fake former husband. He’ll come by tonight at 8, and she has to keep up the act until midnight.

Where do I even start with the plot holes here?

1) If they were a real couple, Ricky would know instantly this guy’s fake. Divorced couples communicate better from separate states than these two sitting on the same couch.

2) This is a radio show. Unless the fake husband walks in with Ira Glass and a boom mic, this is some bullshit.

3) Why would Ricky even care? Lucy told us in Episode 2 she knows absolutely nothing about his time in Cuba, including former lovers. Hypocriticardo.

4) She could tell him everything ahead of time, unless she’s too stupid to think of this.

She’s too stupid to think of this, so by evening she’s really nervous. She can’t even light her cigarette – which for Lucy is like forgetting how to walk.

That’s when a hobo comes by and digs through Fred and Ethel’s trash.

This is the best dressed, best educated, most suave hobo I’ve ever seen. Bro has a British stage accent and uses the word “lilting” for fuck’s sake.

If this guy’s homeless, I’m doing everything wrong.

When he arrives at Lucy’s door, she immediately assumes he’s supposed to be her former husband. Ricky does what we all expect and screams at her.

All because of one dude. If Ricky only knew how many other men she’d jollied just to keep the lights on…

The fun-loving hobo eventually catches on and starts playing into Lucy’s ruse. He walks around the room stealing things and drinking the liquor straight from the bottle while Lucy tries to explain.

FWIW, I don’t really get what’s so funny. That’s what I do at all my friends’ houses. My apologies to Carolyn Sewell.

Ethel comes in and recognizes the Oxford professor-turned-tramp and chases him out, and Ricky corners Lucy and starts screaming at her again as though THAT’S gonna give him answers, until he’s interrupted by the actual guy from the radio show. Lucy says:

“Ricky I want you to meet… my second first husband.”

And they all look out at the audience with a womp womp.

We come back from commercial and Ricky’s packed a full suitcase and put on his cutest travel clothes like Brigitta fucking von Trapp. Apparently he can’t even stay in the same house as this walking venereal disease he once called his wife. 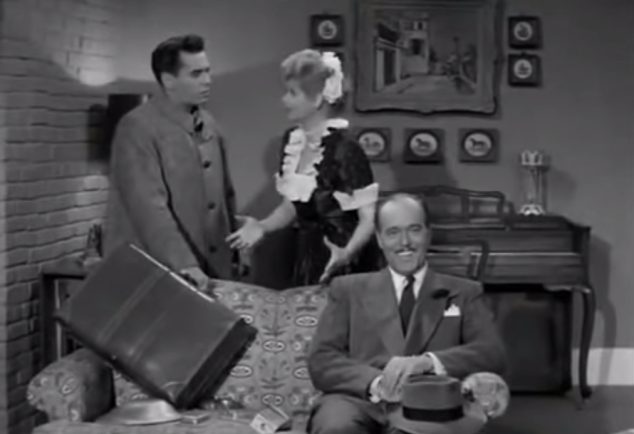 Ricky escapes to a safe house for men who were once brutally forced by their wives to listen.

Finally, the only other MAN in the room explains everything, so Ricky understands and calms down.

When Lucy finally gets her $1000, Ricky snatches it from her hands and uses it to pay back all her bills. She’s totally bummed because she only gets $.25 change for all that effort.

Lucy’s priorities are all out of whack. If they’d gone another day like this, they might have lost their electricity, gas, phone service, and even gotten evicted, and Lucy would be on the corner “jollying” anyone for anything.

I suppose Lucy’s banking on her friendship with the landlord to prevent her from being homeless.

Or she’s looking over at that classically trained hobo fresh off the boat from courting Lady Mary at Downton, and she’s thinking “Meh. So what if I have to live on the streets? I’m gonna buy me another donkey!”

–
Like the review? Join me next week for S01 E06: The Audition. New posts every Friday!