(Or: Ricky Is Too Brain Damaged to Remind Lucy to Take Her Crazy Pills)

This episode opens in the kitchen, with Ricky ignoring Lucy. And I mean, ignoring. I’m talking liberal House reps to Netanyahu, Tea Party to climate change, Hollywood to the elderly IGNORING.

Lucy, in response, starts talking to herself. And that’s where the real problems in this episode first become clear: since the last time we saw them, Ricky and Lucy were both brain damaged from blunt force trauma to the head. There is no other explanation for the shit that’s about to go down.

To get Ricky’s attention, Lucy makes him toast. It flies out of the toaster and Ricky catches it midair. I don’t know which is more concerning, that their toaster is possessed or how I was sorta turned on watching him catch that bread.

Wait. I married a baseball catcher.

Thank you all for sitting here reading my therapy sessions.

Lucy leaves to trick Ricky into noticing her. She rings the doorbell. Ricky:

You know, Ricky, putting “dear” at the end of the orders you bark at your woman doesn’t make you any less gross. Also, chew with your mouth closed. Dear.

Turns out, Lucy went to the back door… of their NYC apartment building. WTF architecture???

Ricky is full of one-liners this morning, like “The least you could do is stay here and have breakfast with your husband.” He says this before kissing a grapefruit and leaving for work two seconds later.

Ricky basically has no idea his wife exists. And that’s where we are when Ethel arrives.

Ethel knows the solution, though! She consults a book by Dr. Humphreys called How to Keep the Honeymoon from Ending. Note: Dr. Humphreys is NOT board certified.

You know, my aunt told me about a book like this once. Basically it said to wrap yourself naked in cellophane and sit spread eagle on the coffee table when you hear your husband approaching the front door. I guarantee you that would work better than the advice offered by Doctor Fraudulent Sonofabitch.

But let’s crack this book open, shall we?

Chapter One: When Love Is on the Way

“Often after the first years of marriage, the husband seems to lose interest in the wife. He reads the paper at the breakfast table; he doesn’t answer when you talk to him; in short, he doesn’t seem to know you are alive. More than likely this unfortunate condition is the fault of the wife. Research shows that this condition starts when a wife becomes careless about her appearance.”

I’ll stop us there. THIS IS RIDICULOUS!!! I mean, really, NO ONE has a breakfast table anymore. With apartments getting smaller and student loan debt skyrocketing, I’m lucky to sneak a meal on the tabletop we made out of our dog crate.

Wait, where were we?

The good doctor asks whether the wife has gotten sloppy, and points out the best way to remedy that is to show up for breakfast looking “glamorous and sophisticated” so her husband will love her again.

Lucy is wearing the latest from the Divorce Collection at JC Penney.

I know exactly how you feel, Ricky. I’m so sick of these women in their disgusting PJs, making breakfast for everyone and setting out the newspaper ahead of time and always being in a good mood. Put on a push-up and some fashion tape or I’m not looking up from the Metro section.

So Lucy does it. She shows up in a black sequined gown the next morning and Ricky still doesn’t notice her. He’s reading the same newspaper two days in a row and ignoring his wife in an evening gown. She’s all distraught and I’m all OMG RUSH THIS MAN TO THE HOSPITAL HE’S CLEARLY DEVELOPING A TUMOR ON HIS TEMPORAL LOBE!!! Why is nobody listening to me?!

I guarantee the camera guys stage left are paying attention to her.

Let’s return to our bullshit. I mean our book.

“Chapter Two: If the method in Chapter One fails, you should next try the ‘Be a Pal’ system.”

That means you share his interests, which in Ricky’s case is poker.

Ethel offers to teach Lucy, and says it will only take a few hours, and Lucy agrees because — and this is important — they have literally nothing else to do with their day.

So Lucy crashes the boys’ poker game that night, which they’re playing with their asshole friends Hank and Charlie.

Ricky asks Hank if he minds Lucy joining them. Hank says no. Hank clearly minds, and it suddenly makes perfect sense he’s one of Fred’s dear friends. He looks like he wants to strangle any girl that sneaks into his clubhouse.

Charlie, on the other hand, looks sad and a little grossed out. It was hard enough being the worst at poker in this group of bullies, but now he’s got this fug vagina to deal with.

Hank throws in some chips and I pray thank you I’ve never met Hank or been tied up in his murder van. 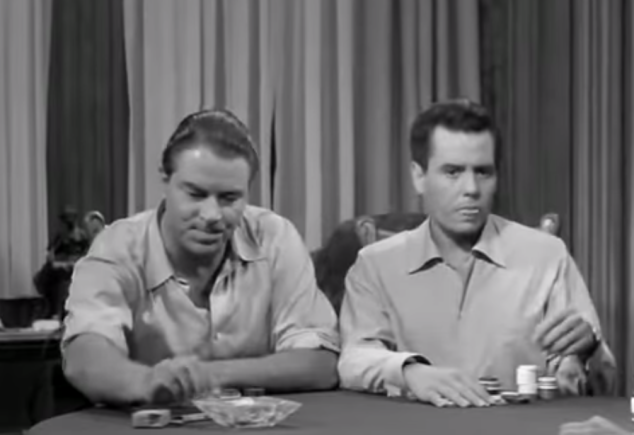 Men’s rights leader Hank, and proof Desi sometimes looked at the camera like a pro.

Lucy has apparently spent the entire day learning lady poker by accident. In lady poker, you throw all your cards and chips in the air and have a pillow fight and chit chat about menstruation before eating too much sugar and lezzing out with your camp buddy. Because women can play rummy, and hearts, and spades, and solitaire, but give us poker and our boob hormones explode our brains. (Citation: Boob Hormones, 1951, by Dr. Humphreys).

Lucy wins, but in real life all us women know that really means you lose, which leads us to Chapter Three:

“If you play games with your husband be sure not to beat him.”

Third time’s a charm. Dr. Humphreys says “most men have happy memories of their carefree childhood” so “baby your husband” and try to remind him of his mother.

It should go without saying that this method will do NOTHING for you in the boning department. But if all you’re looking for is attention, read on.

All Lucy knows about Ricky’s childhood is he had five brothers and his mom was a singer and dancer. And now she entrusts her entire life to this guy. Let me educate you, Lucy: Ricky likely grew up in 1920s Havana, when the Great Depression hit the sugar industry hard and launched many Cuban families into dire poverty. If he happened to grow up rich anyway like Desi Arnaz, he probably fled the country in 1933 to escape political persecution following Batista’s “Revolt of the Sergeants.” The more you know!

So Lucy goes Cuban on Ricky. And by Cuban, I mean this show somehow finds a way to be more offensive than Sábado Gigante: we’ve got chickens, we’ve got a donkey, we’ve got Ethel dressed as a Mexican man in a mustache and poncho taking a siesta.

Desi Arnaz signed off on this, guys. Hell, he even looks like he’s having fun! It is after all an epic cultural mashup: A Cuban actor in a Mexican tourists’ market-turned-living-room listening to Brazilian Portuguese music.

Lucy dances in, dressed to the hilt as Carmen Miranda — otherwise known as the Chiquita Banana girl. Lucille Ball evidently asked Miranda’s permission to impersonate her. At least someone involved in this has some cultural sensitivity.

Lucy sings the Portuguese song “Mama Yo Quiero,” and when the record starts speeding up, Lucy speeds up with it. Here’s the amazing scene:

This song literally translates “Mama, I want to suck.” Sure, it’s talking about a pacifier. But do I really have to spell this Freudian mess out for you?

Then she pushes five boys onto Ricky who must’ve been cast from the crew’s families. I mean, seriously, one of those kids is Asian. I swear it. And the donkey’s all WHAT THE FUCK IS HAPPENING.

Lucy explains the whole thing to Ricky and the episode goes Gone Girl. Ricky’s like, “No no no I love you I wasn’t ignoring you” because if he doesn’t stay with her she’ll probably slit his throat because this bitch be CRAY. At best, she rented a samba costume, a donkey, two chickens and five children. At worst, she bought them.

On a serious note, I spoke with an actual psychiatrist about what might have caused Ricky’s medical condition of not seeing his wife even when she’s right in front of him screaming in his face. He suggested “conversion disorder,” which can cause a temporary loss of some neurologic functioning.  Analysts believe this is due to an intrapsychic conflict — for example, a husband who’s fighting with his wife, has an unconscious urge to hit her, and then suddenly finds his right arm has gone mysteriously limp. In Ricky’s case, perhaps his desire to get away from the shitshow that is Lucy Ricardo has caused selective blindness.

BAM. That’s what a real medical degree will get you, Humphreys. Go back to your cave. Your diagnosis is no good here.

Like the review? Join me next week for S01 E03: The Diet. New posts every Friday! 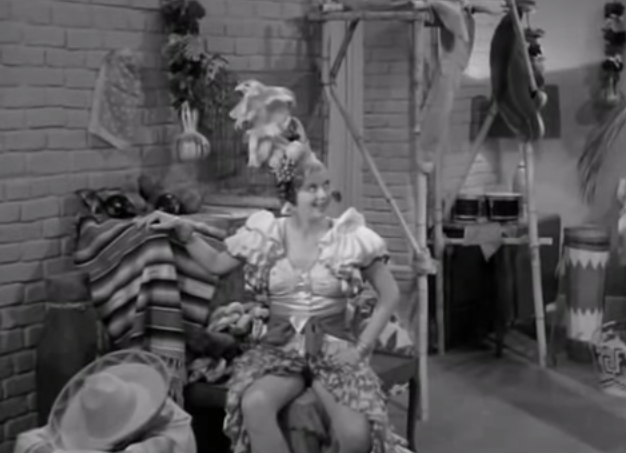 Lose the clothes and add some cellophane and you’ve got an idea, there, Lucy.