Ballers, after many weeks of watching Fred call his wife fat, listening to Ricky sing even when we weren’t that into him, and begging Lucy to suck it up and start her own YouTube channel, we arrive at my very favorite episode: “Lucy Does a TV Commercial.”

Somehow in 1952, writers and performers had a lot more stamina. This is episode 30, and we’re STILL not through with Season 1! There’s 35 of these suckers. Too bad the gang didn’t get addicted to Vitameatavegamin and disappear for a few weeks. We could all use the break.

But we keep pressing on. So sit back, relax, and grab some alcohol and/or medicine. It’s happy hour somewhere!

We open on Lucy darning, and it turns out she sucks at it. It’s an endearing thing about this show: how Lucy can’t seem to do anything right except be conniving. I wish she’d had more career options, because no doubt she’d make an amazing politician or cult leader.

Thank you, China, for making modern socks cheaper than a sewing kit.

Ricky comes in to tell her he’s off to rehearsal.

Lucy: Again?! You’ve been to rehearsal every day for a week!

Yeah, Lucy. That’s called having a job. You have to work every day, for a whole week! Then you get a short break if you’re lucky, and then you have to start all over again.

Ricky’s manager Jerry calls,  and he needs a new girl to do the commercial for a TV variety show. Jerry, call the marketers back and tell them to do their damn job.

But no, he puts it on Ricky. And so frankly, we should all blame Jerry for the shit that’s about to go down.

First, Lucy begs and pleads for the gig, and Ricky says she doesn’t have enough ‘sperience. So Lucy hatches a plot to prove to Ricky how good she’d look on television. 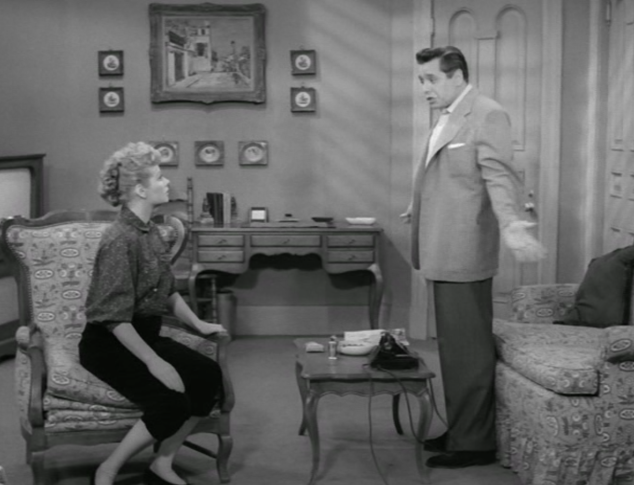 Ricky: “What do you want from me?” Lucy: “An excuse to breathe outdoor air once a week, aka a job.”

Fortunately, she has Fred’s help because Ethel’s “gone to see her mother for a couple of days.”

Yeah, OK. You ask your college friend who works at the domestic abuse hotline what “gone to see her mother for a couple of days” means. We all know Ethel feels as comfortable around Fred as I do around poop sauce on a bed of roundworms.

When Ricky comes home that afternoon, Fred is there waiting for him. (That’s my personal nightmare, by the way.)

Fred turns on the TV, and Lucy’s inside!

I would totally watch this show. Wait, I am watching this show.

She does a Philip Morris ad for the guys. Back then, people watched TV on a giant expensive set, and there were long ads, and you couldn’t fast forward through them or download ad-blocker, and people smoked something called cigarettes, and the cigarettes gave them lung cancer and a lot of people died. Or, as FOX News likes to call it, the good ole days.

Ricky: Well what do you know, 3D television!

OMG Ricky, I wish you were still around. I would take you to an IMAX 3D showing of Interstellar and blow your freaking mind.

Eventually Ricky gets annoyed with her and plugs in the TV, thereby electrocuting his wife. This show could be made into a drama called Disproportionate Reactions. 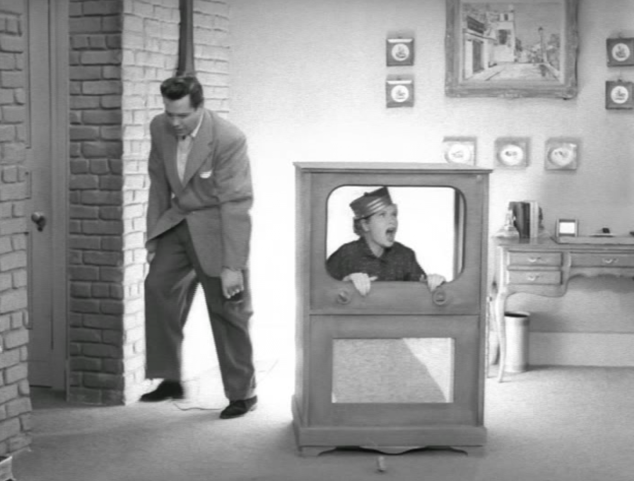 Lucy crossed with Dr. Who.

Lucy gives Ricky the bad news: she didn’t know the TV set rolls out of the case, so she took it apart piece by piece.

I can only assume they spend the rest of the day with the Geek Squad, who if they’re anything like the ones in our area, act a little too haughty until you tell the jerk teenager you know his mom and can get him spanked like a little toddler if he doesn’t shut up with the snickering. (Fuck you, Sean T.)

The next morning Lucy is so angry with Ricky, she stays in bed and won’t make his breakfast.

Ricky: What do you want me to do, starve to death?
Lucy: Would you, please.

Ugh it’s all so much effort. These days if Lucy wanted to be famous, she could just leak a sex tape. Things are so much easier now.

Ricky calls Fred and asks him to pass along a message to the girl doing the commercial. But Lucy is better at eavesdropping than darning socks, so she steps in and takes the call instead.

She tells the girl not to bother showing up because they’ve found a replacement, and just like that another wannabe young actress gives up on her dreams and books a ticket back to Ohio.

NOW WE”RE ALL SET UP FOR HILARITY TO ENSUE!!!

Cut to the TV studio. The director and stage manager are setting up for the commercial. The product is Vitameatavegamin. Perhaps you’ve heard of it.

Director: This stuff any good?
Stage Manager: Well it oughtta be, it’s got everything in it. Meat, vegetables, minerals, vitamins. Alcohol 23%… ALCOHOL 23%!?!?

It’s hard to write a commentary about the scene that follows, because in my mind it’s the single greatest scene of any television show ever. SOOOOO much better than that stupid Red Wedding scene or whatever new thing all you sick, bloodthirsty GoT fans go on about.

But I’ll do my best. First, here’s the famous (and long, and totally worth it) scene. Plus some ads:

OK. For starters, Lucille Ball is exceptional at playing drunk. She did drink in real life, so it’s not like me trying to play a drunk in improv when I was 15. I kept making faces like I’d seen in Guys and Dolls, because I associated drinking with that movie. I looked like a well-meaning, womanizing gangster passing out from a sugar overdose.

Clearly, Vitameatavegamin was a precursor to Vegemite.

Secondly, this episode is why we now have actors unions. I mean WTF making her take all that medication on set! If we treated actors like that today, we’d have hundreds of wrongful death suits from Botox poisoning and Viagra overdose.

Oh, you didn’t realize Viagra overdose can kill you? Well folks, I looked it up so you don’t have to. There was one famous case recently where a rock guitarist from Tokio Hotel got blurry vision and took a couple of days to recover.

But really, he got off easy (get it?). It might actually cause heart attack and kill you.

We’ve all seen how Ricky treats her. We knew it would come to this eventually.

And the last thing I’ll mention is how flirty Lucy gets when she’s drunk. It’s adorable, and it’s a tactic I’ve used many times on my own husband. Oh, you need to work? OK, drink some of this “work-friendly tea” to help you stay focused. But it’s really vodka! We have so much fun.

So after Lucy’s “loaded up on the V” (that’s what us cool kids call abusing Vitameatavegamin), Ricky comes out to do his show. OMG people stayed home on Saturday night for this stuff! He just sings. I mean, to each his own, but I bet they missed a way cool super moon while they listened to him go on and on.

Lucy gets so excited to see him. She wanders on stage and just babbles. I had a strange realization watching her:

Me: I’m kinda similar to her when I’m drunk.
Husband: You really are. But you’re a better singer.

Is it possible I learned how to drink from this episode? That it passed into my subconscious and trained me to become Lucy-like when I lose my inhibitions?

You should probably call your kids right now and ground them until they’re 21.

Anyway, this episode is the absolute best and I’m so glad we got to share it together.

And Ethel isn’t in it.

–
Join me next week for S01 E31: The Publicity Agent. New posts every Friday! 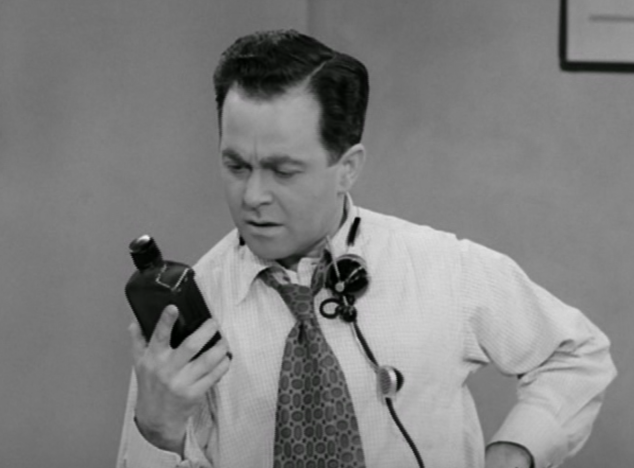 (“Alcohol 23%!?”) My doctors make the same face when I tell them I take bourbon for my health.