(Or: The One with the Meat Jokes)

As I said on the WTF Lucy Facebook page, we have now entered the high holy days of I Love Lucy. This week, we celebrate “The Freezer” — one of the best written sitcom episodes ever. I actually studied this episode in my first TV writing class.

Next week we’ll observe the most sacred Lucy day of the year: the day “Lucy Does a TV Commercial.” You may know it best as the Viteameatavegamin episode. However you traditionally celebrate, here’s wishing you and your families a very happy holiday. Save me some leftovers.

We open on Ricky and Lucy in the kitchen, where Ricky is once again unhappy with his breakfast.

Ricky: Just two eggs? Where’s the bacon?! They look absolutely naked!
Lucy: Well look the other way when you eat them.

Lucy tells him bacon is really expensive. Ricky says to cut back somewhere else, like the beauty salon. She reminds him that means he’d have to be served breakfast by a fugly normal with natural eyelashes and a hair shade actually found in the color spectrum. 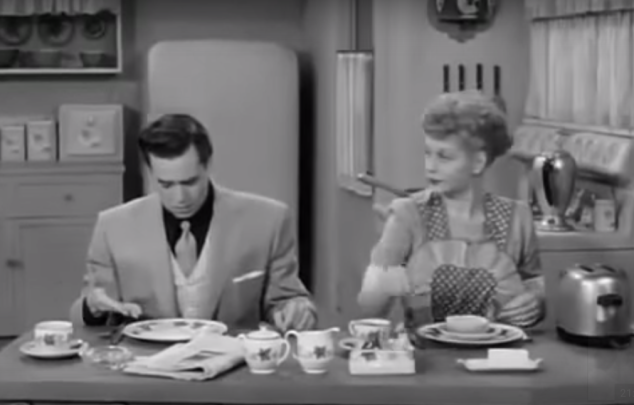 Lucy’s like, “I put the bacon in the yard sale pile with all the shits I give.”

She suggests they buy a home freezer so she can order her meat wholesale. He says he can’t afford it, makes a random fat joke about Ethel (why not), and then leaves his breakfast. Lucy’s like, “You’re welcome, asshat.”

Ethel stops by, and it turns out her uncle has a freezer, and he’ll give it to them for free if they pay $50 to transport and install it. So they buy it, and then they order as much meat as possible, because the more meat they order wholesale, the more they save. 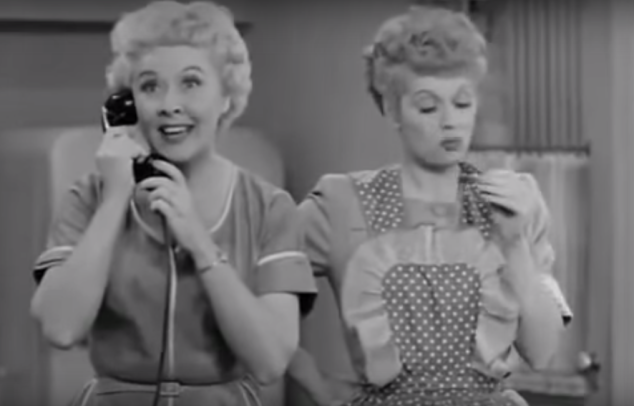 Crazy Eyes and Duck Face are at it again!

At drastic sales prices, beef was $.69 a pound. Inflation should mean the cheapest beef is well over $6/pound today. So stop complaining about those high prices, folks, because factory farms are keeping the cost as depressed as the animals are. And the beef at fast food places is crazy cheap, because it’s mixed with chewing gum, old tire parts, and the dead skin runoff from pedicure shops.

Lucy orders 2 sides of beef, which she doesn’t realize is 700 pounds. Ladies, be careful: Don’t overestimate how much meat you need to feel truly satisfied.

So Johnson’s meat company comes to deliver the order. Last time I watched a guy named Johnson deliver his meat to a woman’s back door…

You know what? Not gonna finish that sentence. You all get the joke. I don’t need to talk down. 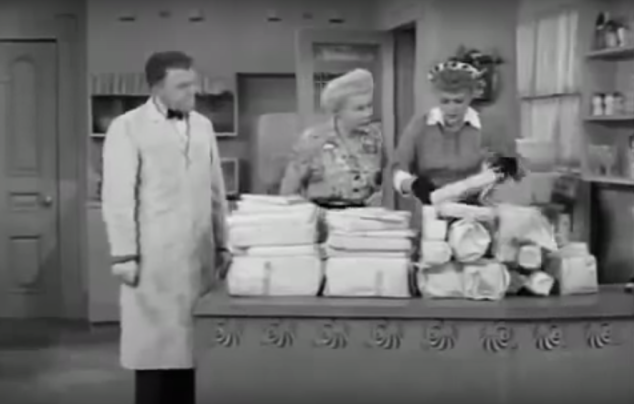 The meat came wrapped. So I can make meat jokes and package jokes. Thank you, TV gods.

Now Lucy and Ethel have all this meat. Plus it cost $483, which means they’re about to get murdered by their husbands.

Ethel: But by buying it all wholesale we’ve saved them at least $500.
Lucy: I hope you can explain all that before their fingers tighten around our throats.

It’s good to see she’s accepted her eventual death at Ricky’s hands, to the point even of joking about it.

They decide to sell the beef in line at the butcher shop. So they go undercover, hiding it in a stroller.

Sometimes I hear the older generation reminisce about simpler times, and I think it’s a little naive. Crimes happened back in the olden days too, I think to myself. But if this episode is any proof, there was once a time when the world was so safe, women would buy raw meat out of a stranger’s baby buggy. I want to live whenever that was. 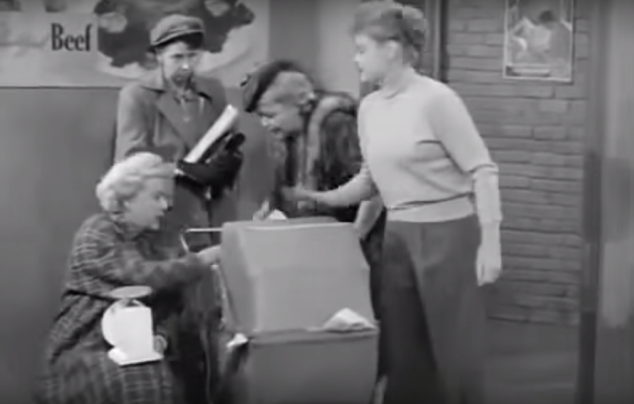 Still, they only sell as much as your terrible Kickstarter campaign (yeah, we still remember), so now Lucy and Ethel have to fill the freezer. But once they’ve moved all 700 pounds, they find out Ricky and Fred heard about the freezer and bought 30 pounds of meat to celebrate their frugal purchase.

So Lucy tells Ethel to stall, so she can hide all that beef they were keeping in the freezer.

Lucy: Listen, if I can move 700 pounds of meat, you ought to be able to keep two husbands occupied for a couple of minutes.

Again, I don’t need to dumb this down for you. You know this is magic.

Ethel stalls by asking Ricky to sing. Perfecto! This will take days! It’s like asking Donald Trump to list his best qualities.

Fred: How about that dandy little ditty entitled “Let’s vamooso to el freezo”?

But Ricky sings, and Fred’s stuck standing there like an idiot, holding his meat. 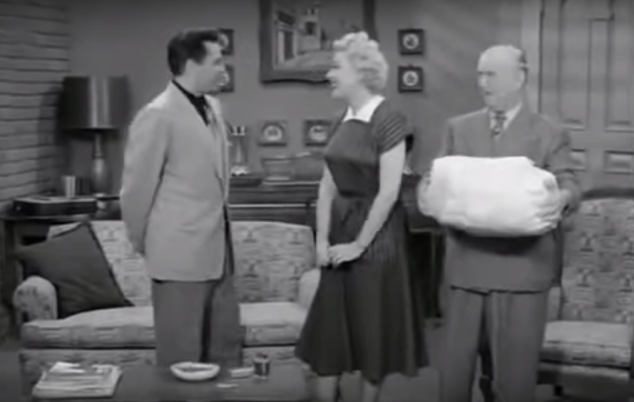 Cute blond flirting with the hot Spanish guy while Fred hangs on to his package. Just like every day of college for him.

Meanwhile, Lucy’s downstairs throwing all the meat in the furnace, because Fred turned it off earlier. (Fred turns off my furnace, too, Lucy. It’s like a Greenland winter down there when I see him.)

But Lucy gets stuck in the freezer. And when they come down to put the meat in, she’s almost dead. We’re talking last moments of The Shining. Elsa had her way with her, is what I’m saying. 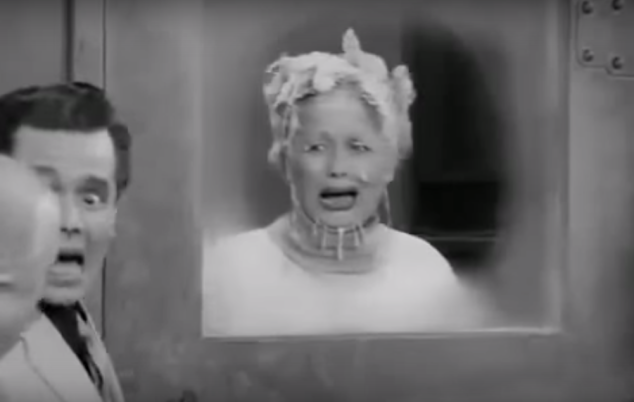 Later, once they’ve gotten her out and she’s warming back up, we discover Fred has turned the furnace back on. Lucy races out, crying.

Lucy: Don’t ask questions. Just get a knife and a fork and a bottle of ketchup and follow me to the biggest barbecue in the whole world!

It’s all so tragic. Little did they know, only a few decades later, suburban families everywhere would flock to giant gluttony palaces and stockpile an apocalypse-worth of toilet paper, chicken wings, and turbo-sized boxes of frozen corn dogs. And people would praise their thrift, if not their physical health.

Lucy, just wait. One day you can feed the gang a year’s worth of beef-flavored ramen for the cost of Ricky’s two eggs.

–
Join me next week for S01 E30: Lucy Does a TV Commercial. New posts every Friday! 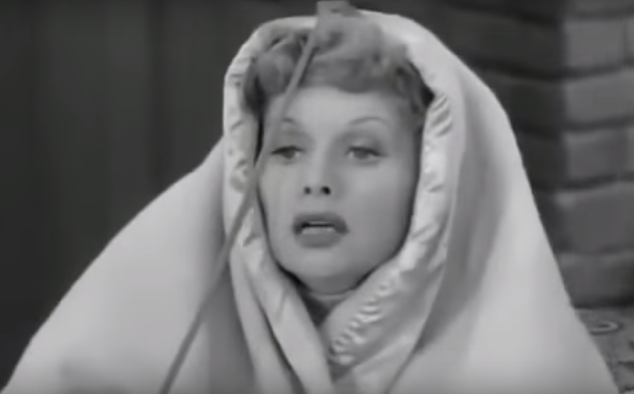 Just because the Pope’s visiting doesn’t mean you get extra credit for dressing like Mary.