We open on Ricky playing cards in the living room. Lucy just finished doing all the dishes, but somehow it’s Ricky who’s in a shitty mood. He doesn’t want to hang out with the Mertzes and doesn’t want to play cards.

He’s your average six-year-old at the end of summer.

Lucy: I’ll get you a gun, you can shoot yourself.

Lucy: Just the other day the milkman asked how your cold is.
Ricky: Big deal.

Ricky, to Lucy that IS a big deal. She lives for the days the piano needs tuning, because she gets to see another human face. Be sensitive.

He’s thinking about firing his press agent, and Lucy wants the job and the $50/week.

So we learn she doesn’t just want to be famous – she wants to make an income. Ricky is so horrified by the idea, he begs her to disown him. 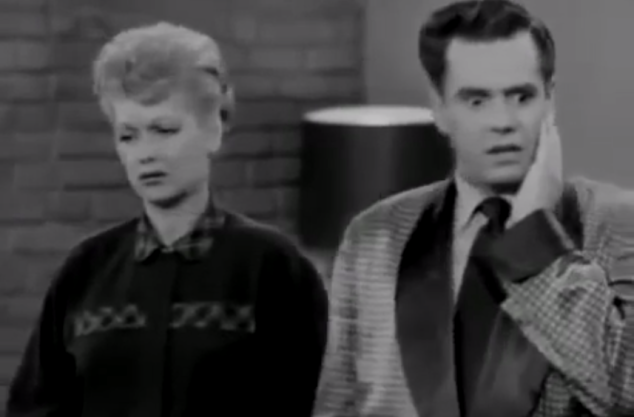 She either just confessed there’s a chopped up body in the trunk, or she asked him if she could get a part-time job.

Actually, Lucy would make an amazing press agent. She knows how to make something crazy enough to be newsworthy. She loves the entertainment business. And she secretly wants to sabotage her clients so she can make it big herself. That’s 100% of the people I’ve met in Hollywood PR.

So like a drunk fratboy, Lucy takes Ricky’s no as a yes, and she gets to work being a press agent.

First, she tries to value her jewels so she can make a story out of having them stolen. But they’re only worth $43. I feel you, Lucy. I keep buying discounted plastic beads at Goodwill, and people keep complimenting them, so my plan is to keep doing that until I’m so old people think I’ve reverted to playing children’s dress-up.

Lucy then decides to have fake royalty visit Ricky. She lands on Scheherazade, the Maharincess of Franistan. 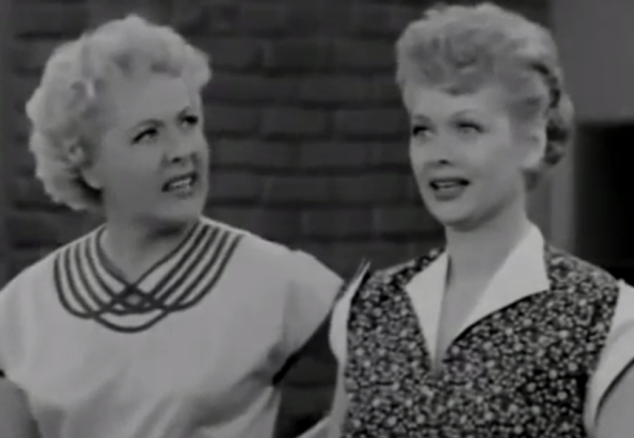 Either Ethel smelt it and Lucy dealt it, or Ethel doesn’t like the plan.

So she calls up the news organizations and does a very bad near-asian voice, telling them the Maharincess is coming to see Ricky perform and will be staying at the Waldorf.

Ricky hears the news, and later at the club, he tells Fred it’s all fake, set up by his awful press agent.

Ricky: …In some ridiculous place called Crapistan or whatever the joint is.

Is it offensive to call a place Crapistan if the original place doesn’t exist? If a tree falls on a mime in Franistan, does anyone sue the logging industry? The world is a mysterious place, and we’re really just renting it.

Ricky goes off on his press agent for pulling such a ridiculous stunt. But the press agent is like “Wasn’t me, boo.” And Ricky gets flustered and excited and looks like he just took an extra dose of Viagra. 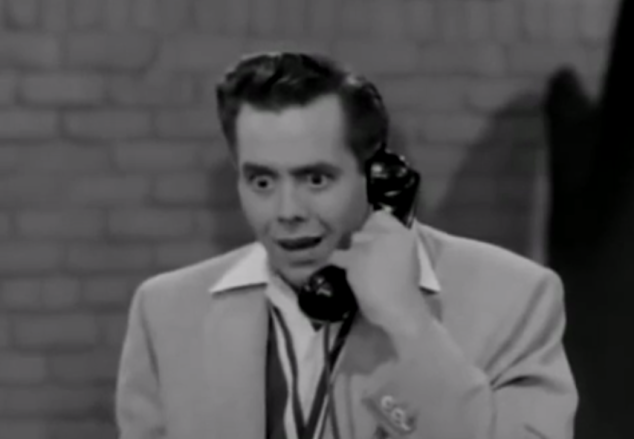 Fred admits he doesn’t know where Franistan is, and Ricky gives him a hard time about it.

Ricky: It’s tucked between Switzerland and Persia, right in there.

At this point my husband, who’s in international development, couldn’t take it anymore:

Husband: Come on!!! Franistan would definitely be in Central Asia.

So Ricky plans a big show for the Maharincess, and we cut to the orchestra setting up.

Ricky looks lovely in his clean tuxedo. But maybe that’s because they got Nancy the Harpist to wipe off his coat for him!!! IN A GORGEOUS GOWN! It’s like they asked Meryl Streep to wipe down the stage on Oscar night. 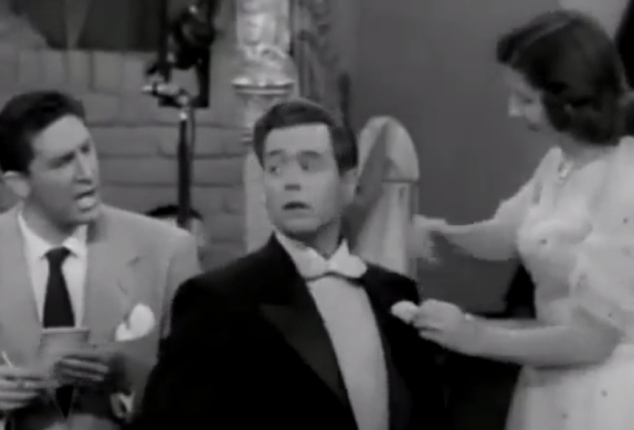 Pearls before swine is what I’m saying. Nancy is a fucking goddess.

The Maharincess enters. I’m not sure what her clothing is called, and any attempts would be wrong because I don’t know much about culturally insensitive costumes from fake countries. But it’s got a sort of I Dream of Jeannie meets 1950s network censors kind of vibe.

Ethel mists what looks like champagne everywhere. I’ve always wanted that, but with bourbon. And not misted, just poured into a glass for me. Basically I want bourbon right now.

This press is there, and If you’re worried about the state of American news or even our general education level, fret not! I Love Lucy proves we’ve been morons for over half a century!

They don’t ask even the MOST OBVIOUS questions:

New York Times, you keep reporting on whether to put peas in guacamole and how JLo looked at the Met Gala. I’m sorry for calling you stupid.

As the Maharincess, Lucy faints every time Ricky tries to sing. But then again, she’s likely from a conservative Muslim family, where they don’t sit around singing:

When we’re dancing and you’re dangerously near me,
I get ideas.
I want to hold you so much closer than I dare to

And when you touch me and there’s fire in every finger
I get ideas.
And after we have kissed goodnight and still you linger
I kinda think you get ideas too. 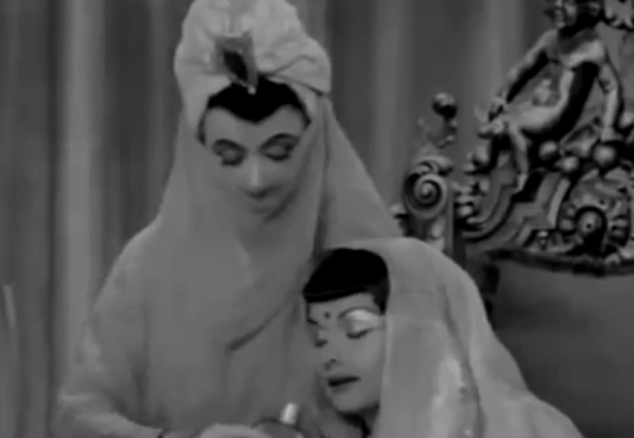 Someone wake up the Maharincess. We’ve got more cultures to persecute.

Finally, Ricky performs “Babalu” – which no surprise is really freaking loud up close. My husband and I turn the volume down on this song every time, but you can’t do that when you’re sitting right next to the guy!

When I was in elementary school they took our class to a bagpipe show at the Agricenter. There were like 1000 bagpipes playing in this domed room mostly reserved for gun shows and the rodeo. I still hear those bagpipes in the back of my eardrum. Maybe Scotland had too many tourists at the time and needed to convince us kids that hell is real and it’s just north of England.

Lucy and Ethel end up back at the Waldorf. I’m not sure what time of day or night it is, but they need to check out. I guess the Waldorf had an hourly rate at the time or something, for all the hookers. 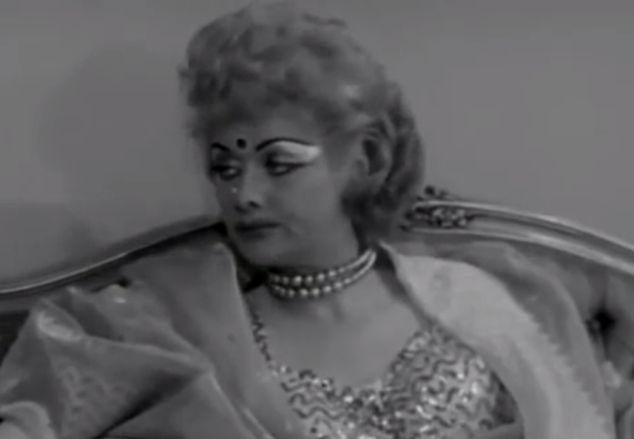 But then the Chief of the Franistan police comes and says the revolution has started, and Lucy’s in trouble. There’s knocking on the door, and two masked thugs enter.

They stab the police chief and tell Lucy and Ethel the Tiger is coming and they’re going to be stabbed and sliced and whipped, etc. And then the Tiger enters and starts threatening to torture them.

If you assume it’s a comedy and therefore no one will die, the scene is bearable. But even as a prank, if three hooded men with knives and whips stood over me in a bed and I didn’t INVITE them there for Friday night playtime, this would require 20 years psychiatric care, absolute minimum. 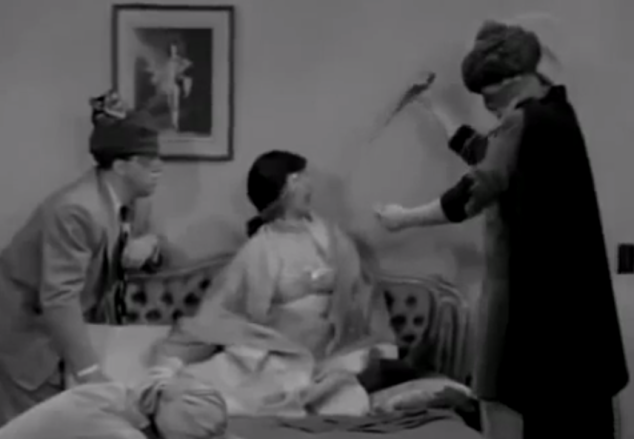 In the end, they all take off their masks and reveal themselves as Ricky, Fred and two actor friends (including Mr. Foster, our old buddy who chased the milkman in The Gossip). Those actor friends must think the Ricardos are completely cray. And that’s coming from actors.

I confess to my husband that I always liked Ricky in the Tiger costume.

Me: I wanted him so bad.
Husband: His hair all messed up like that?
Me: OMG don’t.
Husband: He looks like a character from Camelot.
Me: Stop turning me on to him! He’s gone now! I can’t have him!

In the end they don’t comment on the fact that Lucy did, in fact, boost Ricky’s publicity.

But the $50/week would all go toward post-traumatic therapy, so what’s the point, really.

Join me next week for S01 E32: Lucy Gets Ricky on the Radio. New posts every Friday! 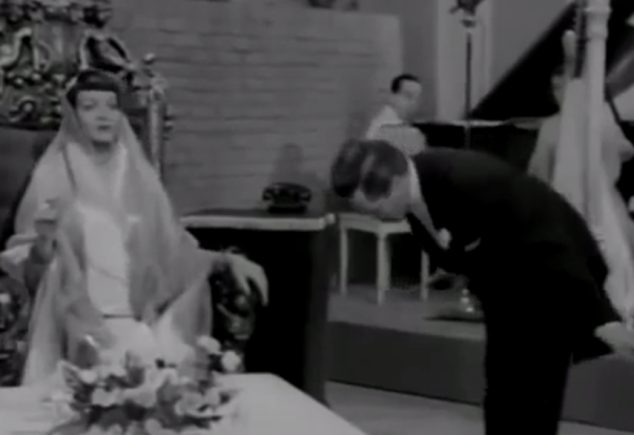 If some dude refused to let me work, I’d eventually make him bow down to me, too.