This is my last post of 2016, and that felt really good to type. I had thought about doing one last post on Friday 12/30, to end with a bang. (The next episode is “Lucy Goes to the Hospital” – one of the first televised storylines of its kind, and Desi’s favorite episode. It’s going to be great.)

But you know what? You can wait till 2017 for it, because this year has sucked total butt and doesn’t deserve it. It hasn’t earned a single good thing.

Let the electoral college vote, and if they decide to bring this year something worth celebrating, I’ll post it. Otherwise, Prince is just as dead, Trump is just as elected, and I’m just as fucking done.

We open on Lucy looking at a photo album of her and Ricky’s baby photos. They use their real photos:

It feels weird posting these without the option of you liking or favoriting them.

Ricky comes in concerned she’s up so late, but Lucy has been thinking about what their baby would look like.

Fortunately the internet has solved this problem for us:

Lucy + Ricky, or Licky, is a depressed Irish girl (but I repeat myself)

Lucy also found a photo of her great-grandfather, who was an artist. Lucy’s excited to bring the cultural paradise that was 1953 to her new child:

That’s the first time a parent ever worried about their kid not becoming an artist, and a generation of flower-power peacenik hippie commie scum later, it’s clear why parents don’t say such things anymore.

Lucy: Our child’s artistic and cultural future is at stake.

Lucy, give it sixty years and your little artist will be outsourced to Kardashian selfies. The child’s artistic and cultural future is already dead.

Lucy decides to become an artist. Not sure that’s any of Ricky’s business, but he seems to think so:

Ricky: Well, I guess it won’t hurt if you dabble in some watercolors for a while, but don’t get too involved. You haven’t got much time before the baby gets here.

In fact, she has 3 weeks. Three weeks to become a great artist. Or you can just take up photography. Judging from my Facebook feed, that’s a thing people think they’ve mastered in 3 weeks.

She goes to an art supply store and the salesperson tells her she has the hands of a sculptor. He is an obvious con man who preys on young aspiring artists in order to take advantage of them to benefit himself. So he’s also the new head of the National Endowment for the Arts. (2016, did I mention you can feel free to off yourself early?)

Lucy falls for the flattery. Completely. She sculpts something, and he calls in his boss Mr. Abbott, a famous art connoisseur, who’s obsessed with it, too.

It looks like a giant lump of poo, which these days I would purchase myself and title, “Current Global Situation.”

They convince her to buy 50 pounds of clay, tell her they’ll personally handle her first exhibit, and she gives them a blank check because – again – stupid.

Then she leaves and they throw out the clay.

It’s almost like the clay is a metaphor for campaign promises but I can’t dig further because I’m too depressed/drunk.

Ricky comes home to find Lucy hard at work in a new smock. She is very proud of her creation, and actually it’s not the worst. THIS is the worst:

Ricky can’t tell what it is, so then Ethel comes in and Lucy tells her to set Ricky straight:

Lucy: Now tell Ricky what this is. Go ahead, it’s as plain as the nose on your face.
Ethel: Oh yeah! …Is it the nose on somebody’s face?

Lucy complains the problem is she doesn’t have a model. But she could just swallow all her repression, ennui, and underutilized talent. That’s what the rest of us do.

She needs someone she can manipulate into modeling for her.  Someone with an ego problem who’s extremely easy to flatter… but who could that be…? 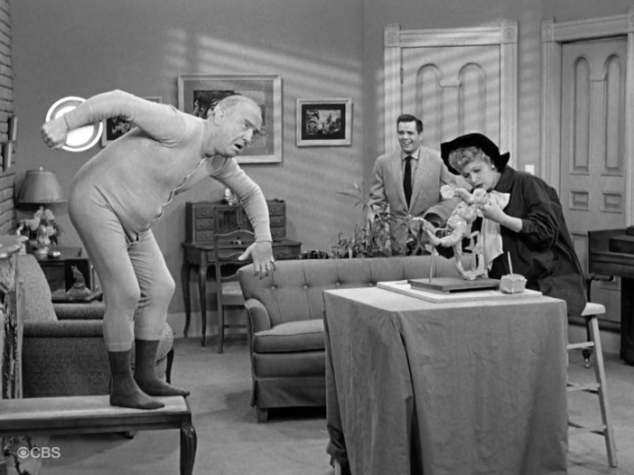 He gets stuck in that position and decides to go bowling. He also gets live audience applause, so his fragile male ego is like WORTH IT!

After Fred bails, Lucy decides she needs a professional model, but Ricky explains they don’t really have the money. He’s going to have trouble as it is covering all the baby costs. That is incredibly reasonable, IMHO. Well done, Ricky, for explaining the situation without being a jackass. Lucy, however:

LUCY GET YOUR HEAD IN THE GAME – 3 weeks from now there’ll only be room for one baby in that house.

He says if he believed she had talent, he would invest in it. He offers to bring up a great art critic to look at her work, and if that critic likes it, she can have whatever she wants.

So she decides to go all in:

Lucy: I’m going to make a bust of myself.
Ethel: I thought you’d already done that (hehe)
Lucy: (LOOK OF DEATH)

Poor Ethel just tried to make a joke. I Love Lucy is really about how hard it is to maintain female friendships when one side is a manic-depressive narcissist.

Ricky brings home the lead art critic for the Times. OMG, this guy just wanders around town looking at housewives’ arts and crafts projects? No wonder journalism is dying.

But Lucy fakes them out by putting her head through a table and pretending to be a bust of herself.

The critic tells Ricky he’s married to a genius. And he’s so excited to be there for the launch of a career, he wants to buy it.

Ricky won’t sell Lucy’s bust without her there, but then the critic offers $500, and Ricky decides “Consent? Whatever that is, it sounds overrated!”

Ethel tries to ruin the sculpture by moving its (Lucy’s) face around. But finally the critic pays and picks up Lucy’s head to take it.

It dawned on me at the end of this episode, Lucy spent almost every scene in either a huge smock or under a table. This entire episode was designed so we didn’t see how pregnant she was.

I don’t know whether to be sad that pregnant women were considered so unseemly and controversial at the time, or impressed with how well the writers dealt with that limitation.

Making due with an incredibly unjust, upsetting, misogynist situation caused by forces much greater than yourself? You know, maybe this was actually the PERFECT episode to end 2016…

_
Join me next time for S02 E16: Lucy Goes to the Hospital. New posts on Fridays!