We’re at 1953! Another year, another round of progress we can undo over 60 years later.

Note: this week’s episode is listed as Episode 19 on Hulu because facts are dead. It’s actually Episode 14, but that’s only according to every major TV archive and film site. If you FEEL like it’s episode 19, congratulations. You’re our new Secretary of Lucy.

We open on Ricky, talking with Fred on the phone. Fred wants to come up and watch the game with Ricky, but he’s worried Lucy might mind because she’s getting further in her pregnancy and might not want company.

Let’s pause here and mark this moment as the first time Fred has ever been the most considerate man in the room. Fred is fucking Feminism 101 compared to the shit Ricky pulls in this episode.

Nah, Ricky says, come on over! Lucy’ll love having us all there to cook and clean for.

But see, this was before Google Calendar, and asking would have been a total pain in the ass. So Ricky’s pretty surprised to find out he can’t watch TV with the guys because it’s the afternoon of Lucy’s baby shower.

By surprised, I mean pissed. Ricky is pissed off that his pregnant wife is about to get attention.

I’m…I’m… starting to think… the world isn’t actually about me.

Lucy does what all of us ladies have perfected over a lifetime. She finds a way to make it not about her, so she can actually have something for once.

Lucy: Think of the baby.

Ricky: Well think of me! I finally get my first afternoon off and I can’t even sit in my own home and watch my own television set.

Ricky has a point. In a few weeks, Lucy will be sitting over a postpartum sitz bath to disinfect her genitals. All that relaxing! Lucky bitch!

So Lucy tries another tactic: she reminds him they’re getting all that great baby stuff for free.

He sulks. (Stupid baby, stupid pregnant wife, all I have is a doting family and a great job doing what I love.) SUCK IT UP, BUTTERCUP.

Lucy asks Ricky to take out the trash. He barely represses his man-rage at this indignity. UM WHAT DO YOU THINK SHE HAS TO TAKE OUT.

Ricky: Say, uh, what am I supposed to do for lunch?

Lucy: Oh honey, I just don’t have time to fix lunch for you. Gee, I forgot all about you.

And he mopes away.

After the shower, Ricky comes back in. He probably should have gone to see a therapist, but apparently he just took more asshole pills.

He’s annoyed the baby got clothes. He’s annoyed Lucy is so happy (Ricky I’m so excited! I finally have something to do!). He’s annoyed he isn’t back in his own mother’s womb, where his physical needs were fully met and he mattered to someone.

After Lucy shows him the loot from her shower, he stands there, checks his watch, and says, “Is dinner ready?” 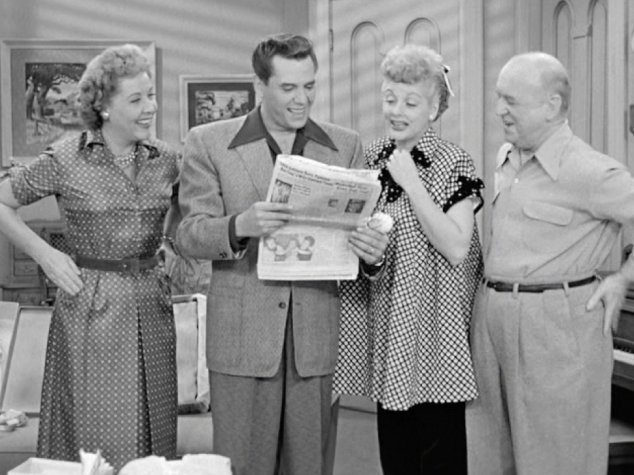 But HARK! There’s one thing that will make Ricky happy! Good press about himself. He doesn’t sound like anyone else I know at ALL.

Fred comes in with an article mentioning Ricky. Except… it’s actually about Lucy “infanticipating.”

Infanticipating sounds like waiting for something with the patience of a baby. In which case, Ricky has a serious case of infanticipation.

In fact, Lucy bought the roast but forgot to cook it. So she offers him a fried egg sandwich which is apparently like saying “eat my turds” judging by his face.

Ricky: Don’t worry about me. I’ll get by… I’ll get something to eat… somehow… somewhere.

“Hey look, another female! Will you make me dinner?”

Cut to Ricky sick in bed.

Now ballers, I’m not proud of how angry this episode made me. What right do I have? I myself haven’t pushed out a kid. But I think there’s always been an assumption in my mind that, if I ever did, the walking ball sack who put that kid there would treat me like a damn princess.

Ricky takes a different approach. He has dizzy spells, pain in his stomach. Lucy blames herself:

Lucy: I suppose it’s my fault. I should’ve gotten you dinner, dear, instead of having that silly shower.

Fuckity fuck. Lucy, he’s not a billionaire running for President. What are you getting out of this emotionally abusive relationship?!?!

The doctor tells Ricky he’s having labor pains because Lucy is distracted from making him dinner. It’s not a prank – that’s his actual diagnosis.

THIS IS REALLY WHAT’S HAPPENING ACCORDING TO THIS SHOW.

Privately, the doctor then lectures Lucy about how Ricky has labor pains because he “feels left out, neglected.”

Doctor: You know, if there was some way to make your husband the center of attention, I’m sure your problems would be over.

And then to prove how smart he is and how much she should trust his idea, he blows cigarette smoke onto the pregnant lady.

Narcissism is no laughing matter. Hug a narcissist today.

Lucy and Ethel decide to plan a shower for Ricky… a man shower. Of course Ricky and Fred are thrilled – they’ve been looking for an excuse to have a shower together for years.

But the guys re-name it a stag party instead of a baby shower. Lucy’s pretty bummed about the connotations of that (read: hookers and blow), so she decides to go in disguise with Ethel.

SO LET’S RECAP WHERE WE ARE RIGHT NOW: Ricky is in so much physical pain from HIS WIFE having a baby, he has to go out drinking with all his buddies. Like I’m too angry to type. Like this patriarchal bullshit. Like get me my women’s studies degree and help me take back the night I’m so fucking done with this fucking shit.

It’s a waste of a bottle when you can shoot them and chop their heads off instead.

Ricky is thrilled. A reporter called and wants to cover the first ever “Daddy Shower.” That reporter’ll have to wait a few years because, dude, this is no shower. It’s a happy hour for the local MRA group.

All the guys brought him presents: beer. Then they make fun of all the things women say when they get presents: “Oh you shouldn’t have! Oh, just what I always wanted!”

Yeah sure, women feel that way about diapers. This episode leaves out the cold, hard truth that most of us go to baby showers to get or receive really fucking expensive ways to catch, clean, deposit, and otherwise manage mountains of human shit.

Anyway, Lucy and Ethel show up to “report” on the “shower.” Lucy looks an awful lot like Theodore Roosevelt, and I hope she finds it empowering.

But Ricky sees through it.

Ricky has seen Lucy as an exotic princess, a hillbilly, and all of these costumes above, and never noticed. But maybe now his pregnancy pains have triggered his spidey sense. Pretty sure his idiot doctor would say yes.

As the reporter, Lucy asks whose idea this party was, and Fred takes the credit for Ethel’s idea while also calling his wife a battle ax. Then this other POS alt-right troll comes up and tells a great story about a guy who gets up on stage at a cancan show and harasses the performers, and Lucy gets so fucking sick of this misogynist bullshit that she blinds herself with her own camera flash and wanders out of the room using only her arms to support her. 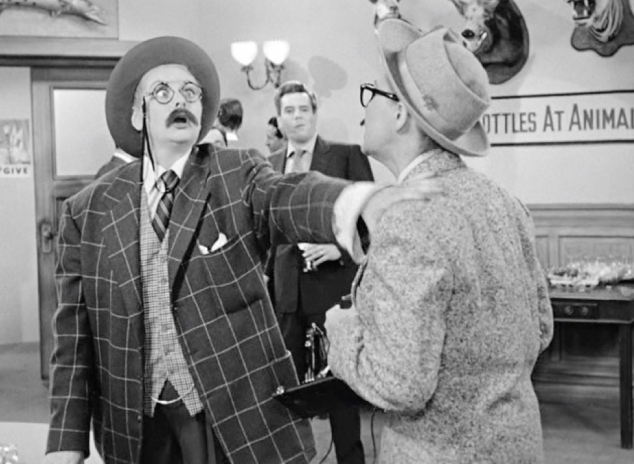 She blinds herself. Being around these men for 5 minutes is a Greek tragedy.

Back at home, Ricky arrives in the bedroom with food, complaining about Lucy’s stupid “silly cravings.”

You know what, Ricky? You shoot a baby out your pee hole, maybe we can talk. Until then, best just sit it out a couple of episodes.

At the end, Ricky realizes Lucy threw him that man-shower because she thought he needed attention. So he pretends to be sick again and demands some of her ice cream.

Proof women are stronger than men: I just typed all of this with both my fists punched through a wall. You try that, Ricky.

_
Join me next week for S02 E15: Lucy Becomes a Sculptress. New posts on Fridays!