Well, well. A lot has happened since the last post. Welcome back, ballers.

I’ve been out on the campaign trail with my dad (yeah, true story), and all I can say is it’s a mad, mad world. I’m so grateful for the messages, tweets, etc. It’s good to be back.

Last we met, Ricky and Lucy were expecting a baby, Fred and Ethel were bickering, and we were giggling at how archaic this show feels.

Now they’re building a wall around Ricky, Fred has joined the alt-right, and Lucy’s life is all of us.

We open on Lucy knitting (so much more relaxing than running for President, ladies). Ricky comes in with bags.

Ricky: There’s only one place in town that sells a papaya juice milkshake.

Now we know how Papaya King started. They saw a need, they met that need. And New York changed forever.

He’s also brought a pickle, which she dips in the milkshake. Lucy, stop. That’s how you got into the mess in the first place!

(OMG I just realized Little Ricky —> Little Marco. Both Cuban, not too far apart in age. Was PEOTUS trolling with an I Love Lucy reference this whole time?!)

But Ricky secretly bought a football and boxing gloves, giving away his preference.

Ricky: Lots of little girls play football, too, you know.

Ricky is now more progressive than about 75% of America. WTF is happening rn.

And Lucy’s bought a dress. 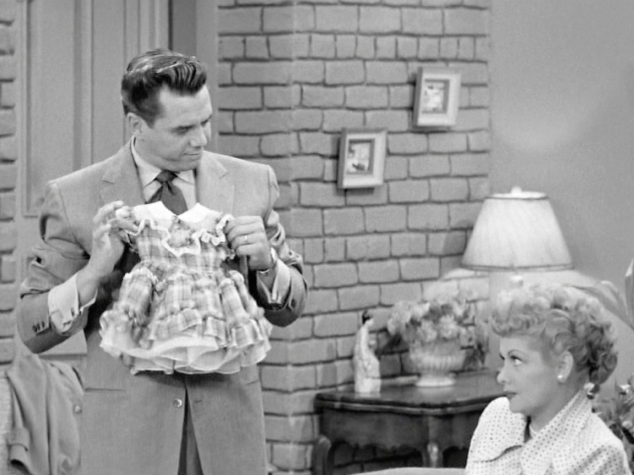 “Thank god our infant has a petticoat, or she’d look like a total harlot.”

Ricky: If you dress my son in this, he’ll NEED those boxing gloves.

Ricky imagines how great it will be to send their child to Havana University…in 1974… shhhh don’t tell him… he’s perfectly happy. Yes, Ricky, Cuba is great and has a bright future ahead of it.

They agree, boy or girl, the child will go to college. And a young woman at college in the early 70s? What could go wrong except the drugs, rape, serial killers, disco, more drugs, cults, and the sexual revolution? She’s gonna have a groovy time!

But until then, the child will need early education. And Lucy, with stunning self-awareness, realizes she’s an idiot. So she starts studying:

The original Rory from Gilmore Girls, but less selfish and probably better at journalism.

Ricky walks in on her reading and says he’s tired.

Lucy: Well this is indeed distressing news, to what do you attribute your plethora of fatigue?

Ugh the thesaurus is supposed to be a tool. You need to read other books, too, to make it work. #lifehack

Lucy: From the time our child is born he’s not going to hear anything but perfect English.

Then with eery prescience, she says, “Hashtag Trump 2016.”

When did Lucy become Rudy Giuliani? But whatever, Ricky’s like, no problem! I was planning to spend about 18 years in the club with the guys anyway!

To prove to Ricky his accent is disgusting, she has him read a children’s book. It proves nothing except English is stupid:

Ricky declares they’re going to teach the child Spanish. She looks horrified: “SPANISH?!?!?!” But it’s just a joke. lololololol, I mean why give him a useful skill that allows him to communicate with half his family.

And so Lucy decides they and the Mertzes will take lessons from an English tutor.

Fred arrives prepared. Why he has schoolboy clothes in his closet is anyone’s guess. I’m definitely not saying he’s a perverted monster. I’m saying you can look at that face and decide for yourself.

Mr. Livermore, the tutor, is what any english teacher would be if they made their living teaching spoken english to people who already speak perfect english. He’s a walking, human-shaped bout of constipation, and he’s horrified by the gang’s vocabulary:

Livermore: Just a moment. Did you say “OK?”

Livermore: We must rid our speech of slang. Now besides “OK,” I want you all to promise me that there are two words you will never use. One of them is “swell” and the other one is ‘“lousy.”

Lucy: OK, what are they?

Livermore: One of them is “swell” and the other one is “lousy.”

Fred: Well give us the lousy one first.

Livermore: I don’t believe you quite understand.

Ethel: Just tell us what the words are and we’ll never use them.

Livermore: But ––– May I have a glass of water?

Lucy: OK. I mean yes. Haha I would say OK, that’s a swell way to get off to a lousy start!

These cretins are how Brexit happened.

Turns out the lessons are free because Lucy promised he could perform at the Tropicana. His act is to music as Ricky is to saying the word “juice”– perfectly good effort, but a lost cause from the start.

This episode is brought to you by every mansplaining, Warby Parker-wearing college friend you know. #notallmen #notallbutyesyou

Ricky finds this whole deal atrocious (another word, incidentally, he wouldn’t be able to pronounce). So later on, he brings Mr. Livermore back for more lessons.

But this time, Ricky made his own promise: He’ll get Mr. Livermore auditions with every record company in town if he’ll come to the house and pretend his accent was sullied by being around Ricky.

Mr. Livermore: I dun’t either. I can’t splain it, but he’s a swell guy!

Then he sings Babalu.

Lucy is horrified and throws out the whole plan. You see, it turns out, nothing brings everyone together more than deep, disgusted hatred at the sound of an immigrant’s voice.

_
Join me next week for S02 E14: Ricky Has Labor Pains. New posts on Fridays!