Ricky’s mad and Lucy’s in love. He just doesn’t deserve her.

He’s pissed because she keeps overdrawing her account. That’s because in the second season we delve into Lucy’s addictions to hookers and blow.

I feel the same as Ricky whenever I see people dressed in a shirt as ugly as Lucy’s.

They fight, and she keeps saying “Yes, sir” and “No, sir,” like they’re in bed or something. Then Fred and Ethel just walk right in like they own the place. …Technically they do, but still.

Fred: Let’s face it, when it comes to money there’s two kinds of people: the earners and the spenders. Or as they’re more popularly known, husbands and wives.

Fred, there are also two other kinds of people: decent people and total douchebags.

Ricky points out the women would probably think twice about spending the money if they earned it. And that’s especially true since they’d only make 64 cents to the dollar back in 1952.

Ricky and Fred think the women lie around the house and only get up occasionally to play canasta. The women think making a living is easy. So they all decide to switch.

If those men can take off a whole week to do housework, then their job really is easy. 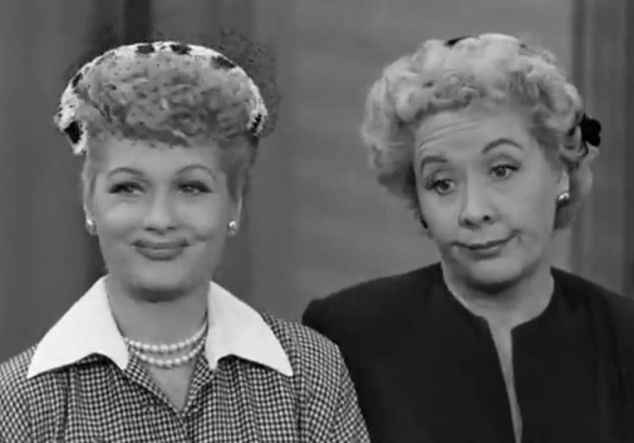 That feeling when a man tells you how silly and dumb your career is.

Ricky orders Lucy’s breakfast from the drugstore, and so Lucy gets furious, throws him over the table, and beats his ass. Oh wait, no? She just smiles and goes on her merry way? Take notes, Ricky.

Lucy and Ethel head to the employment agency. I’d hire Ethel in a heartbeat. If she’s managed her emotions all these years, she could manage a Fortune 500 company.

The head of ACME Employment, A. Snodgrass (what, T. Bimbleboo was taken?), tries to find them a job.

Ethel: We don’t know how to do anything.

Except manage a building! Stop burying your dreams, Ethel!

Look at all the “desirable yet unattainable” betches.

In the meantime, Fred keeps wearing Ethel’s stupid cleaning attire. Her head cover, her apron. And everyone laughs because he has a penis but wears a style popular for people with vaginas. I mean, let’s call a spade a spade: that is the whole joke, and yeah it’s lame when you think about it.

The men wreck their wives’ clothes, and then start on wrecking dinner, too. The women are really getting a bad deal today.

Don’t worry, Ricky. After your housework today, Lucy won’t be thinking about putting on lingerie for you ever again.

Back to Lucy and Ethel. They’re at Kramers Kandy Kitchen, or KKK. Which makes sense, because the woman running it is basically a Nazi guard.

Lucy sits down to work with the chocolate, and it looks like she’s finger-painting in the waste my dog produces after a sea salt enema at the beach. I’ve literally never wanted candy less than after watching this unhygienic biddy rub her nose with melted chocolate, then kill flies in it, and get in a fudge fight with her coworker. 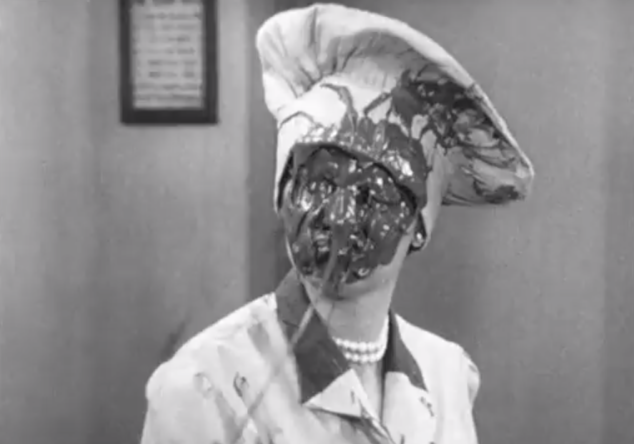 Ricky: What do you know about rice?
Fred: Well, I had it thrown at me on one of the darkest days of my life.

Ricky makes 1 lb. per person. So the rice overflows, and the men fall everywhere picking it up. Gotta hand it to them: they’ve learned how to save money. They’re only getting the absolute cheapest laughs.

Those Nazi candy makers are clearly making the assembly line go too fast so they have an excuse to execute their victims.

And Lucy was two months pregnant at the time of filming! Can anyone say gestational diabetes?!

So it doesn’t work out for anyone. The women come home, fired, to a kitchen destroyed by the men. They all lost this week.

But the men want to show their appreciation to the women. So they buy them a 5 lb. box of chocolate. Someone call a cleaning lady – we don’t want to watch these guys trip all over the vomit!

_
Join me next week for S02 E02: The Saxophone. New posts every Friday!

Ladies, pull yourselves together or the guys will assume you got fired for PMSing.