We open this week on Lucy in her hoarder’s closet. We all have one. Mine looks like Christmas and Hanukkah had a baby and no one cleaned up the afterbirth.

So yeah. Apparently Ethel and Fred have an attic. They’re clearly rolling in money, because these days that Upper East Side crawl space would make a “cozy 2-bedroom steal at $3200/mo.”

Don’t mind Ethel. She’s only here for the view.

Lucy’s getting ready to go on tour with Ricky. He didn’t technically ask her to join him, but she’s got a long history of manipulating her way into things. In high school, for example, and she pretended to play saxophone so she could hang out with the football team.

So… Lucy likes faking it with large groups of men.

Ethel: I did it the hard way – I played left tackle.

Vivian Vance was actually a svelte model, but it’s cool.

Back in the house, Ricky’s in a bad mood. Not one for timing things, Lucy tells him she’d like to go on tour with him, and he freaks out.

Lucy: Well, why can’t I go along too?
Ricky: We’re doing one nighters – one night stands.

Ding ding ding! At least he’s honest. But this brings up an obvious question:

Ricky: You wouldn’t fit in. You’re not one of the boys.
My Husband: What about Nancy the harpist???
Lucy: What about your harp player Nancy?
Husband: NANCY!!!!
Ricky: She’s not going and neither are you.

LAME. Nancy is a fucking jewel.

We find out Ricky needs a saxophone player, and a lady in the audience audibly says “Oh no!” We’ve had a whole season of Lucy. We know what’s coming and still, it’s not like anyone’s about to change the channel. 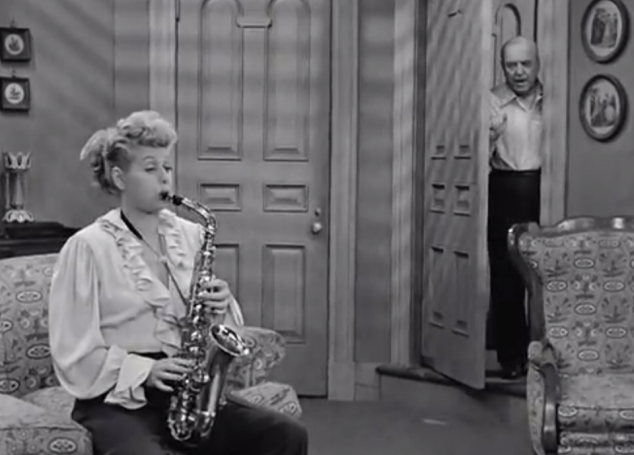 She’s not one to toot her own horn, but she’s perfectly willing to “toot” the “horns” of her high school football team…

Later, Fred walks in on Lucy practicing because it sounded like something was wrong with the plumbing. Lucy asks Fred how to fit in when she auditions:

Lucy: How can I show him I’m one of the boys?

One of the male musicians? Oo! Oo! I got this one!

So she goes to the audition dressed like a band member. And the band enjoys it so much, even Desi can’t hold a straight face. But Ricky doesn’t budge:

Ricky: When I go on the road, I want you to stay home and be a good little girl.

Considering she’s a grown woman carrying your baby, you must mean “stay home and nourish a good little girl inside your own body, which is a miracle I take for granted in our patriarchal society.”

So Lucy changes her strategy. She decides, as any sane woman would, to trick Ricky into thinking she’s having an affair:

Lucy: I think Ricky will take me on tour… if I convince him it isn’t safe to leave me at home.

She asks Ethel to come save her if she hears too much of a commotion, and Ethel worries she might not make it in time. Let’s pause here on the ACTUAL DOMESTIC ABUSE they’re discussing.

So later on, with Ricky home, Lucy pretends her boyfriend is hiding in the closet and left his hat. As someone who’s dated men who are in the closet, I can tell you Ricky doesn’t have anything to worry about. Worst thing that might happen is the guy convinces Lucy to buy a better dress. 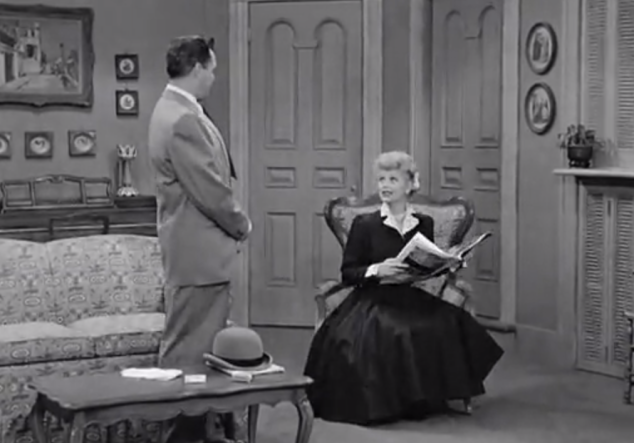 That’s her adultery dress? She looks like a grieving Victorian monarch.

Lucy succeeds in upsetting Ricky and she storms out, pretending to be offended by his suspicion. But Fred recognizes his hat as the one that was planted, so Ricky figures out what’s going on. With a gleam in his eye, he decides to “catch that red-headed mouse in her own trap.”

He calls his friend Julie (who is a guy. The writers apparently wanted to prepare us for the Transparent era. Otherwise why not name the guy Dave? That’s the liberal progressive media for ya.)

Anyway, Julie sets up Ricky with a few men, who all hide out in the closet and terrify her.

Lucy: He was giving me saxophone lessons!

Lucy eventually gets chased out the door by her gang of fake lovers. It’s a little horrifying. Are other women into being chased, and I’m just out of touch?

I prefer to be wooed with tomato soup and a grilled cheese sandwich, but to each her own I guess.

And cut to: Lucy, shaking Julie’s hand. Another happy ending.

I love this show.

_
Join me next week for S02 E03: The Anniversary Present. New posts every Friday!

I’m so glad Nancy’s having a good day today!