OK, I know what you’re thinking. An episode titled “The Handcuffs?” Let me guess, we’re gonna get like 20 jokes about kinky sex.

We open on everyone bored with Fred doing magic. He’s been performing for an hour, and he’s worse than Gob from Arrested Development. Although he’s still better than my friend’s disturbing one-woman show at Frannie’s Improv Basement.

Fred tries to do a handcuff trick on Lucy, but she knows her way around the S&M prop world.

So after the group gets bored by handcuffs for probably the first time in their dark, dirty little lives, Fred and Ethel leave. And we find out Ricky needs to rehearse that night for a TV show.

Lucy’s distraught. He only gets one night off a week, and she never sees him anymore. She’s so whiny! She sees him every day when she brings him breakfast in bed. That’s solid bonding time. Use the time to you have with the ones you love, Lucy!

They were supposed to see a movie, and Lucy jokes:

Lucy: I can’t remember the title, but there was a guy named Ben that won a chariot race. I understand they have pictures with sound now.

The Ben Hur you may have seen didn’t come out until 1959. She was talking about THIS Ben Hur, the trailer of which was clearly written by Donald Trump. WATCH THIS GLORY. IT’S GONNA BE YUGE.

Ricky rehearses instead of going to date night, and he uses this precious time he’s stolen away from his wife to nap.

So Lucy comes in and does what any domestic abuser does. She handcuffs him without permission while he sleeps.

Lucy: I’m gonna use these on you every Monday.

I bet you will, Lucy.

Fred and Ethel run in. It turns out those aren’t the trick handcuffs! No shit! You’d think Lucy could tell the difference between magic show handcuffs and Civil War handcuffs. One is plastic and the other is a medieval torture device:

Fred: Any idiot should know the difference.
Ricky: Any idiot (looking at Lucy).

Ricky also has a few choice words for his beloved:

As I recall, it was till death do us part. That event is about to take place right now.
– Ricky, Making a Murderer Season 2

They try to call the locksmith, but no one’s available because TELEVISION.

So they go to the bedroom and start getting undressed. FINALLY! I’ve been waiting for this for 2 seasons! But in a moment of great irony, the handcuffs stop them from getting too sexy.

They could at least take off their pants, but do these people care about FACTS? NO. They sleep in their clothes all night. Why the hell do they think I tuned in? Don’t they know me?

The next morning, the locksmith shows up. Ricky and Lucy haven’t slept well. They look like Noah and Allie from The Notebook after a hard day of shooting. Know’m saying? 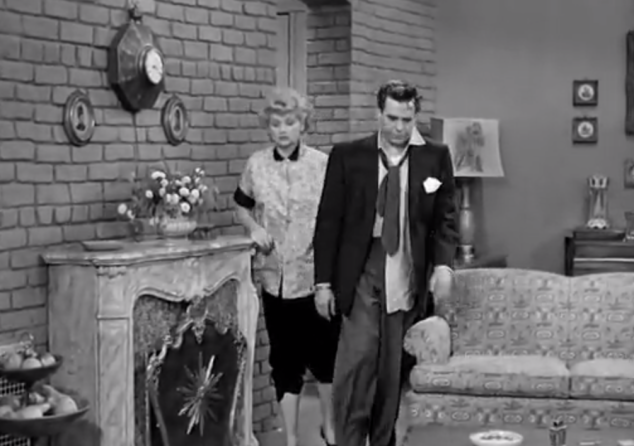 We were just… you know… Netflixing.

The locksmith knows Babalu, but doesn’t know how to get them out of the handcuffs. It’s like when the TimeWarner lady tells you she should write comedy for a living because she started a funny cat tumblr once, but she can’t tell you why your internet is down.

The locksmith has to go to Yonkers to get the extra old handcuff keys, but he’s locked out. Serious professional here. This is what happens when you call ACME Cheap-Ass Locksmith & Co.

So they can’t get the handcuffs off in time for the TV show. They head out to Television Center, Studio A. That place exists about as much as the Trump Civil Rights Museum.

Ricky’s agent tries to file the cuffs off, but it’s impossible. For all the bad that happened during the Civil War era, let’s all agree the USA made a mean set of handcuffs.

So Ricky goes on live TV, and Lucy becomes his arm from behind a curtain. It’s a classic YouTube technique they obviously stole.

Ricky sings a horrible song about Chile that you’d expect from Dora the Explorer or whatever kids are into these days. And eventually the locksmith comes and separates them, while Ricky gets the applause.

Lucy waves her hand, like hellooooooo I saved this damn show. But nobody cares, Lucy. When you’re not handcuffed to Ricky, you’re handcuffed to obscurity.

_
Join me next week for S02 E05: The Operetta. New posts every Friday! 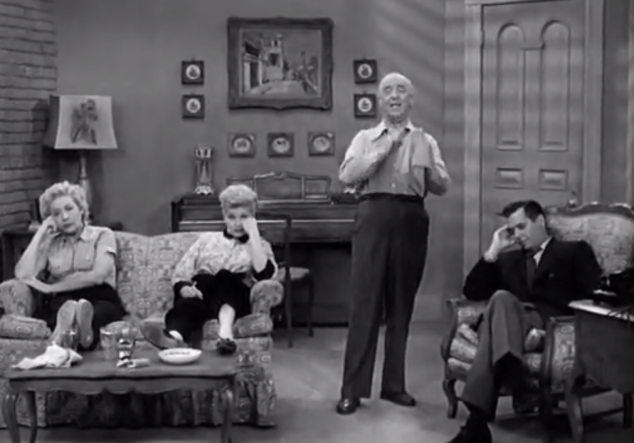 OK, he’s corny. But there’s no need to treat him like Jeb Bush.