(Or: Lucy Goes All Black Swan & Reminds Us Why We Need an International Women’s Day)

This week we open on our two favorite couples sitting around after what must have been an epic dinner. 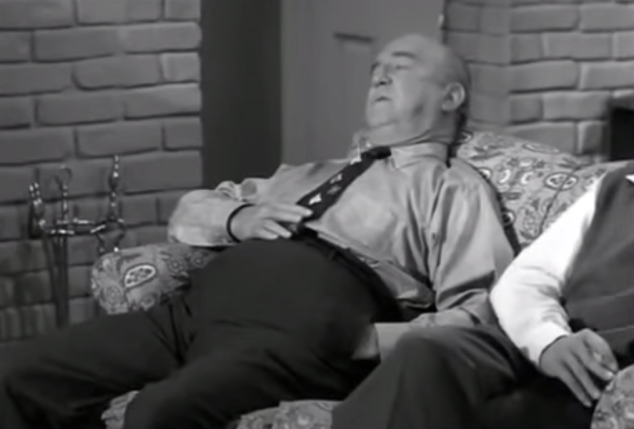 Fred never learned self-control or cause and effect, so he blames Ethel for how gross he feels:

“It’s your fault. You put too much food on the table.”

Turns out, Fred ate 16 oysters and Ricky ate “more oysters than all of us put together.” My math says they consumed about 75 oysters, which are an aphrodisiac. This episode could have gone a toooootally different direction, and quite frankly, I’m disappointed. I was thinking something like: 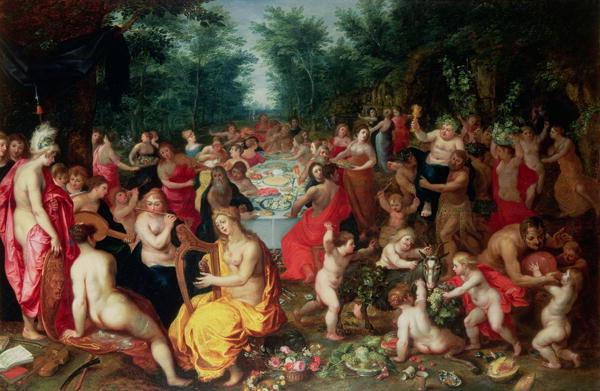 Why are there babies there?!?!

But Fred ruins that image in my mind because of how high he wears his pants yet again. It’s like he shoved a Kardashian’s butt into the massive space available around his fly.

Ethel says eating is her hobby. “You should watch that,” Lucy tells her snobbishly before downing more coffee and cigarettes.

Note: Ethel is a talented, caring person, a loyal friend, and beautiful in her own right. So please don’t judge all women by the rest of the bitches in this episode. #notallwomen

With that out of the way…

Lucy calls the rest of them a “chubby little trio.” She believes food doesn’t turn to fat on her body because she’s actually a glitter fairy who poops mint leaves. But they call her bluff, and it turns out Lucy is a whopping 130 pounds. That’s up 20 pounds from her previous weight of 110.

When she finds out she weighs 130 pounds – and this is not an exaggeration – Lucy threatens to kill herself.

Let’s take a moment here, shall we? Gather a little perspective? I’m worried one of my perfectly healthy readers will see these numbers and get concerned. After all, 130 is pretty normal. You could only eat kaleberries and oatnuts and still land at 130. So what gives?

What gives is this entire episode is a load of toad-brained, fat-shaming, bullshitting, bitch lies like the ones Caitlin, Katelyn, and Cateland told you in elementary school when you still had a little baby weight and they were like “jump off a cliff, Shamu, you’ll never be loved!” I AM LOVED, DAMN YOU, AND SHAMU COULD NEVER JUMP OFF A CLIFF!

Lucille Ball was 5’7” – in comparison, the famous fatass Heidi Klum is 5’9” and weighs a disgusting 137 pounds. If Lucy really weighed 110 at her height, we’d be like OH MY GODIVA WHAT HAPPENED TO YOU EAT SOMETHING EAT IT NOW YOU’RE GONNA DIE.

(EDIT 4/15/15: I’m reading Ball of Fire, and OK so it turns out there was a time when she weighed 110. But you know what? Producers were put off by how skinny she was and didn’t like how she fit her costumes. We can’t win this one, ladies. Let’s focus on the wage gap, not the thigh gap.) 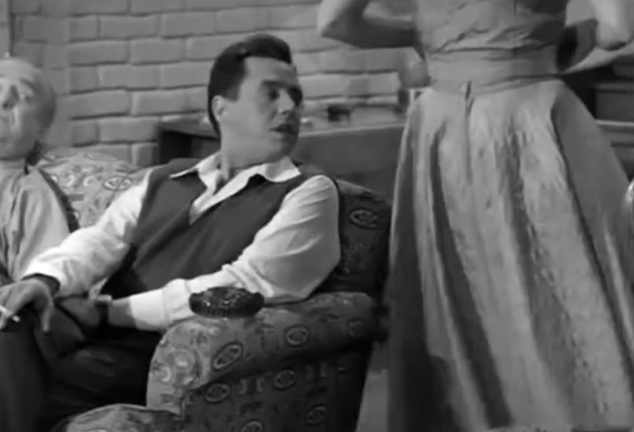 Ricky tells her she looks wonderful, and she bursts into tears. Now we find out what she’s really worried about: for the first time in I Love Lucy, Lucy reveals she wants to be in show business. If any of you are new to the sitcom, this will come up again every damn day for the next 9 years.

It’s never entirely clear why Ricky has a problem with Lucy being in show business. I mean, she’s hot, she’s talented, and he hires women all the time. The only possible answer is that he’s a chauvinist hell-bent on crushing the dreams of the woman he loves so she’ll keep making him dinner.

But dinner is an oyster feast, so I can’t really blame him.

The phone rings – it’s Jerry from the club. He needs to find another “girl” because Joanne is quitting. And he needs someone a size 12 (modern size 4-6) to fit in the former dancer’s costume. Lucy begs to audition, and Ricky caves.

When Lucy and Ethel show up for her audition the next morning, they’re in awe of the club. This is the place her husband works every day, night, and weekend, but somehow it’s like an exotic island because patriarchy.

Lucy lines up with the other bitches vying for the role. These are not your average bitches. Average bitches bitch because they’re average. These are those hot, successful bitches who complain about their feet just to look like they feel human emotion. The type who say: 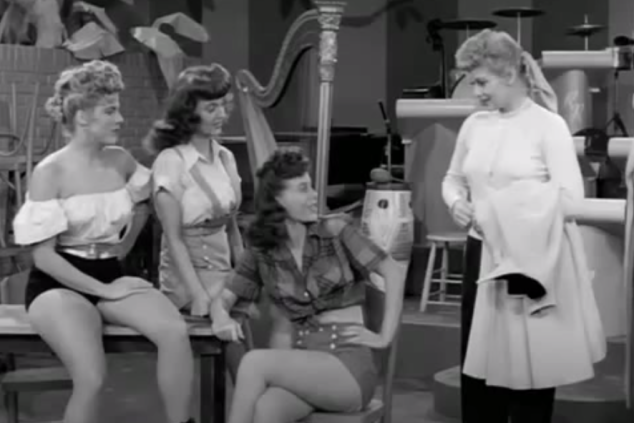 Lucy convinces Ricky to give her the part if she can get down to size, which would mean losing 12 pounds in 4 days.

“I’m gonna get rid of this fat if I have to chop it off with a cleaver.”

I hope you’re serious, Lucy, because that’s one of two options you have. The other is to cut half the skin off your body. But then the blood and guts might stain the costume, which sorta defeats the purpose.

Turns out, though, Ethel is an amazing personal trainer. She suffers from Fully Repressed Emotional Disorder (FRED), and she lets it out on Lucy.

Fast forward to dinner. Fred brings his dog Butch. Of course his dog’s name is Butch. Even Fred’s pet is compensating for something. Fred has taught Butch to eat from the table, which is a horrible habit that explains why we never see Butch again.

Lucy gets under the table and pretends to be the dog so she can eat something. Butch gets Lucy’s food instead, and she tries to get it back, and almost gags him for the protein in his vomit and things get really dark and Butch is all WHAT THE FOX TERRIER IS HAPPENING TO ME? 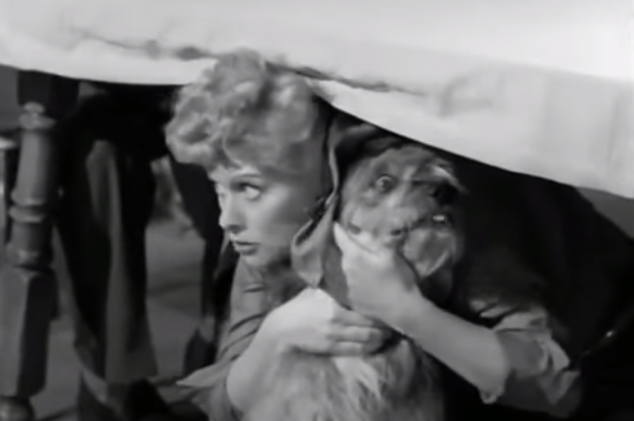 In a last ditch effort to lose weight, Lucy tries a human pressure cooker (I’ll save you some time: these don’t exist), which I assume she has yet again rented without permission. So that makes 75 oysters + 4 steak dinners + a human pressure cooker? Ricky’s lucky women couldn’t get credit cards freely until 1974.

Exhausted but victorious, she loses the final pounds.

In the meantime, Ricky is at the club, doing his job like a normal person. And since his job is Cuban Band Leader, he shakes his “chicka boom” all over some lady’s face.

My husband was watching with me and said, “Woo, he was a sexy man.” Then he said, “Hey stop typing.” Then he said, “I’m going to stop talking now because anything I say you put on your blog.”

Lucy joins Ricky and crushes it, while Fred and Ethel look on. Here’s the scene with proper sound:

Cultural Aside: the song “Cuban Pete” was written by a British-Polish-Scottish Jew posing as a Hawaiian-turned-Latino band leader. Confused? You’re a racist.

If you’re like me and you’re wondering how Lucy got the part this late in the process, or learned the whole thing with no rehearsal, or built up enough energy to do it, prepare yourself for some dark. shit.

Lucy has tied the other woman up and locked her gagged body in a closet. To get her to teach the dance number, we can only assume Lucy tortured her earlier. As for the sudden burst of energy, maybe she drank the girl’s youthful blood. I can only report on what I see.

I dunno if it was, like, Lucy’s time of the month or what, but locking away a woman’s bound and kidnapped body is not what Woolf meant by the feminist phrase “A Room of One’s Own.”

Fortunately for women everywhere, Lucy is now so malnourished she can’t get out of bed and continue her reign of terror.

Terror – at least next episode – belongs only to Ricky…

Like the review? Join me next week for S01 E04: Lucy Thinks Ricky Is Trying to Murder Her. New posts every Friday! 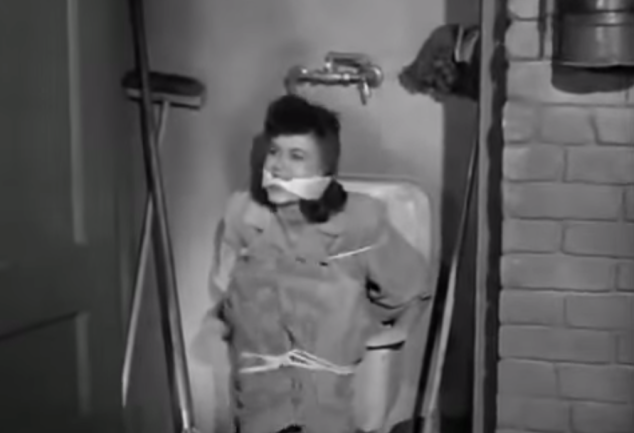 The American Guild of Variety Artists (AGVA) was founded in 1939 to represent performing artists for live performances in the variety field. But you can’t call them while you’re being tortured.