(Or: The Cast Puts the Bic in Transphobic)

**More WTFacts are at this week’s Episode Watch Party.**

Sorry but no. I can’t start there. What’s with the title? I’m so sick and tired of this highfalutin, frenchified, European english.

This is ‘murca, and it’s mustache here, not “moustache.” Even my text editor just spell-corrected that commie version with the “ou.”

You want to spell things like some socialist micro-car-driving wine snob? Move to Sweden and buy an Ikea.

But when you write for television, which was founded here in the home of the free, you cut out the “o” along with humility, affordable health care, and gun control.

We open on Lucy primping in one room while Ricky primps in the other. He’s decided to have a mustache (note the spelling), and in a stunning reversal of the double standard, Lucy goes off on him about it.

Lucy: It looks like an eyebrow, and your mouth keeps staring at me.

Ricky pencils it in with makeup, but Lucy’s still not satisfied. They agree to have Fred and Ethel break the tie.

Talented or not, Ricky will never be a spokesperson for Movember.

The Mertzes tell him it looks great – but what the hell else do you say when your friend’s face pubes are completely absurd? You say nothing, is what you do, and let him humiliate himself. That’s love.

As the whitest token minority of all time, Ricky is being considered for the Arab lead in the film Moon Over Baghdad.

Believing if Ricky can look Arab, anyone can, Ethel does an “oriental” dance from Egypt. It’s the worst. 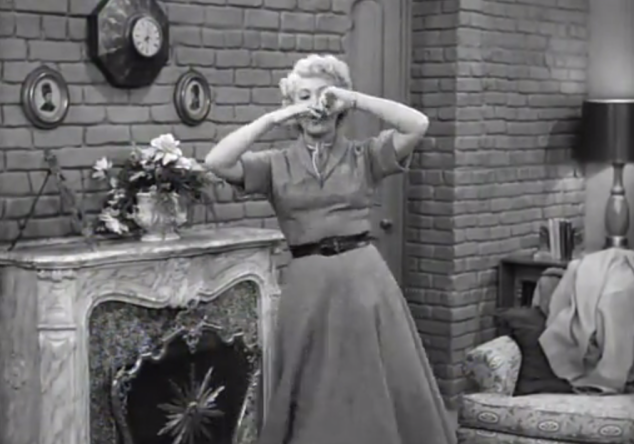 Ethel’s looking for any excuse to use her hips at this point.

Lucy is so mad about the mustache, she won’t go to the movies with him. You know it’s bad when no one will sit in a dark room with you.

Ethel stays behind and tells Lucy a story from her forthcoming memoirs, Ethel’s Shitty Life:

Ethel: You know my grandfather used to have a mustache – a great, big, long, handlebar one, and grandma got rid of it in the middle of the night.
Lucy: How?
Ethel: She tied it around a bedpost while he was asleep and then yelled “fire.”

Lucy decides she’d rather not brutally assault her husband and leave his face scarred for life. So instead, she’ll glue a mustache on herself and refuse to take it off until he does.

Fred and Ethel bring one over, with a beard attached, Santa-style.

Santa Claus is hot and I’m questioning everything.

Truth is, Lucy legit looks better than Ricky with facial hair. Maybe that’s why Ricky hates it so much:

Ricky agrees to shave. He thinks to himself, “I’ll get my revenge, bitch. Just you wait a few decades. Two words: bikini wax.”

But Lucy can’t get the beard off. Turns out, Fred used Bulldog Cement from the prehistoric era. It can only be removed with Bulldog Cement Remover #3, which they don’t make anymore.

Ethel is TOTALLY OK with the fact that Lucy looks better than her, even as an old man.

Ricky calls, and the talent scout is coming tonight. Lucy freaks out because of her beard. Ricky’s like sucks for you. But really, the Ricky we’ve seen over 22 episodes wouldn’t feel that way. He’d freak out, too, and then he’d lock her in a closet.

The talent scout comes over, and Ricky shows his prowess at networking. He pulls out the biggest scrapbook in the history of the world to talk about his career. Compensating for something, Ricky? It’s like a scene out of The Borrowers.

Ricky: “Let me show you all my parts.”

Then Fred and Ethel come in for an unsolicited audition. Fred has a snake charming sock puppet and Ethel does that “oriental” thing that went over so well last time.

The talent scout is not amused.

Fred and Ethel leave, and now Ricky’s alone again with his playmate.

Ricky decides to liven things up by performing a song. But he performs for the audience, so it’s more like his ass in the talent scout’s face while Ricky sings how he wants to go to Cuba “where all is gay.”

Do with this scene what you will.

Suddenly Lucy changes the music and comes in with an Arabian dance. Compared to the rest of these bozos, she’s a cultural sensitivity counselor.

No surprise here: Fred likes to play with his snake.

She falls on the talent scout at the end, and it’s clear she’s gonna get this part using the casting couch route, which is fine. I’m not judging. Ricky’s driven her to this.

The talent scout likes her and asks to see her face.

She hesitates, so the two men chase her around the room, grab her on the couch, and force her to unveil. It’s full-on Mad Men around here.

The good news: after seeing her beard, they still want to test Ricky for the lead.

The bad news: they want Lucy to play his dad.

But if you agree with me about how good she looks in that beard, maybe it’s all good news. All this, over a woman with facial hair? Let’s send this poor guy a “Call Me Caitlyn” Vanity Fair issue and blow his mind.